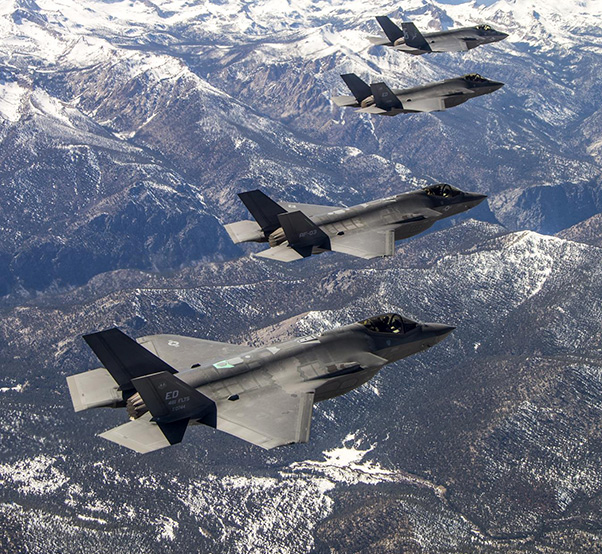 All three variants of the F-35 Joint Strike Fighter are being used by the 461st Flight Test Squadron at Edwards Air Force Base, Calif., in recent multi-ship testing, which employs four or six jets to ensure communication systems between the planes are working properly and accurately.

The F-35 contains state-of-the-art tactical data links that provide the secure sharing of data among its flight members as well as other airborne, surface and ground-based platforms required to perform assigned missions.

“One of the primary reasons we do multi-ship testing is to ensure data is shared appropriately between aircraft in order to maximize lethality and survivability,” said Maj. Raven LeClair, 461 FLTS, F-35 test pilot. “The F-35 uses [Multifunction Advanced Data Link] to share information on air and ground threats in order to more effectively target. This is especially applicable to one of the F-35’s primary missions — finding and killing advanced surface-to-air missile systems.”

The MADL is a high-data-rate, directional communications link that allows secure transmission of coordinated tactics and engagement for the fifth-generation fighter when operating in high-threat environments.

“After the threat is accurately located, it can be jammed and targeted.”

He added that the MADL architecture is divided into flight groups so it is important to test the capability to pass data between flight groups using four or six aircraft to ensure system accuracy, stability and usability during large force exercises and actual combat.

According to the Air Force, the F-35 has unprecedented situational awareness. The F-35’s advanced sensor package is designed to gather, fuse and distribute more information than any fighter in history, which gives pilots a decisive advantage over all adversaries. 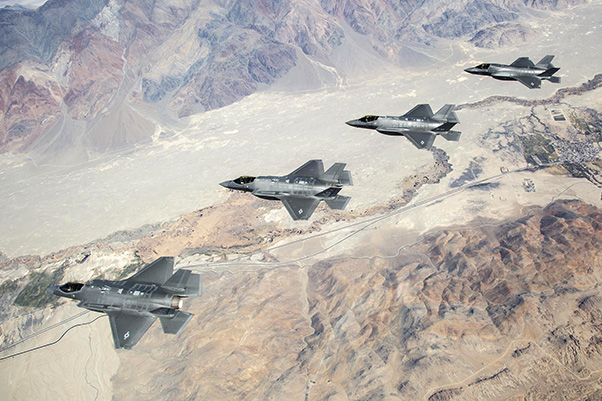 “Having a common battlefield picture is one of the greatest assets in combat,” LeClair said. “This capability must be proven to be secure and ensure maximum interoperability between 4th- and 5th-generation fighters. The F-35 has an incredible capability to show the entire tactical picture and being able to share this tactical picture with all forces is critical to maximizing lethality, survivability and minimizing the risk of fratricide.”

“As we approach the end of System Development and Demonstration phase, many of our capstone testing events will be multi-ship to ensure compliance with the requirements before transitioning to operational testing,” said LeClair.