On Jan. 26, 2017, Kennedy Space Center employees and guests paid their respects to astronauts who have perished in the conquest of space.

The annual Kennedy Day of Remembrance activities included a ceremony in the Center for Space Education at Kennedy’s visitor complex. The observance was hosted by the Astronauts Memorial Foundation, paying tribute to those who acknowledged space is an unforgiving environment, but believed exploration is worth the risk.

The following day, Jan. 27, marks the 50th anniversary of the loss of the crew of Apollo 1. The ceremony also honored the astronauts of the STS-51L Challenger crew who perished in 1986, the STS-107 crew of Columbia who died in 2003, along with other astronauts who were lost in the line of duty.

“The reward is the pursuit of knowledge and the advancement of what we learn as human beings. It’s written in our DNA to continue that journey,” he said. “My generation stands on the shoulders of these giants we are honoring and recognizing. They exemplify the pioneering spirit that got us to where we are today.”

Center Director Bob Cabana, a former space shuttle commander, spoke on the reason for the ceremony.

“Each year, at this time, we come together and we pause to remember those who made the ultimate sacrifice in our quest to explore beyond out home planet,” he said. “We pause to enforce the lessons learned so they are not repeated again.” 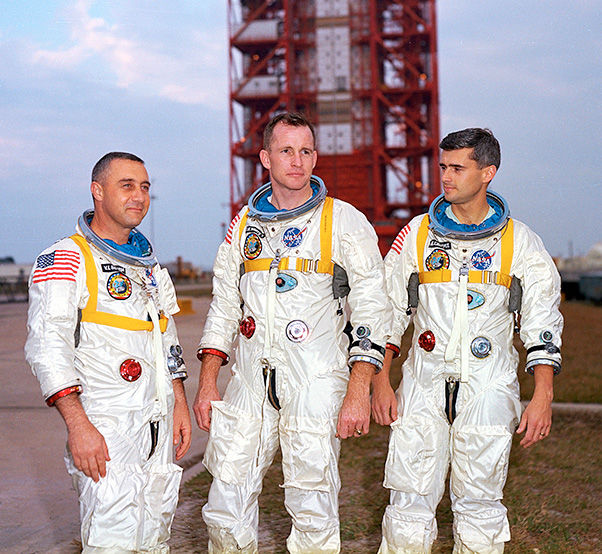 Astronauts, from the left, Gus Grissom, Ed White and Roger Chaffee stand near Cape Kennedy’s Launch Complex 34 during training for Apollo 1 in January 1967.

Looking ahead, Cabana challenged the NASA-industry team to apply the crucial instructions from previous tragedies.

“Creating and maintaining a culture of trust and openness is the greatest lesson we can learn from the past,” he said. “It is critical for our future success and the success of our commercial partners.”

Apollo 1 was scheduled to lift off from Cape Kennedy (now Cape Canaveral) Air Force Station on Feb. 21, 1967. A veteran of both Mercury and Gemini, Gus Grissom was selected as commander. Senior pilot was Ed White, the first American to walk in space. Rounding out the crew was first-time flyer Roger Chaffee, a member of the third group of NASA astronauts.

On the afternoon of Jan. 27, 1967, the Apollo 1 crew arrived at the Cape’s Launch Complex 34 for a launch countdown rehearsal. They boarded their spacecraft perched atop a Saturn 1B rocket. At 6:31 p.m., EST, a cockpit fire was reported by the crew. Ground crews worked valiantly to open the complex hatch, but the crew perished before it could be removed.

Former Gemini 10 and Apollo 11 astronaut Mike Collins, served as keynote speaker. He noted that the lessons learned from the Apollo 1 accident were crucial to the ultimate success of the lunar landing program. 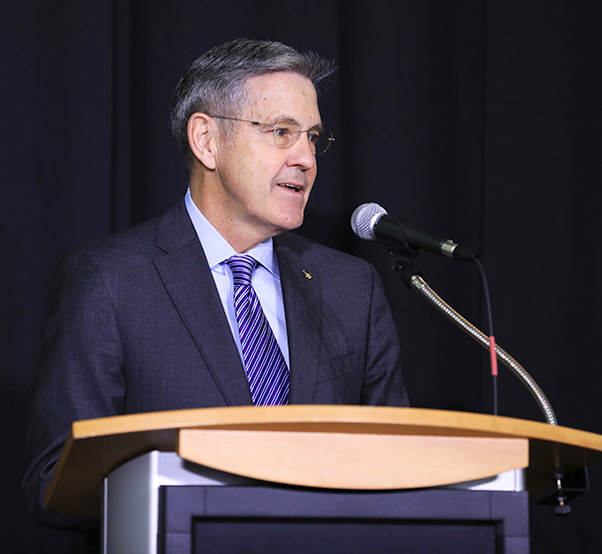 Kennedy Space Center Director Bob Cabana speaks to guests at the Florida spaceport’s NASA Day of Remembrance ceremony. “Creating and maintaining a culture of trust and openness is the greatest lesson we can learn from the past,” he said.

“Apollo 1 is just as important to contemplate as a launch that did not take place, but which was, in many ways, as important as any that flew,” he said. “It slowed things down, but we gained increased reliability.”

Sheryl Chaffee, daughter of Roger Chaffee, recently retired after working for NASA at Kennedy for 33 years. She echoed Collins comments.

“From the ashes of the Apollo 1 fire came the hard lessons NASA had to learn in order to have successful flights to the moon and for further exploration of space,” she said. “I’m so proud to be here today with all of you to pay tribute to my father, his crewmates and the other fallen astronauts memorialized on the space mirror.”

The AMF is a private, not-for-profit organization that honors and memorializes astronauts who sacrificed their lives for the nation and the space program. AMF built and maintains the Space Mirror Memorial and The Center for Space Education at the Kennedy visitor complex. 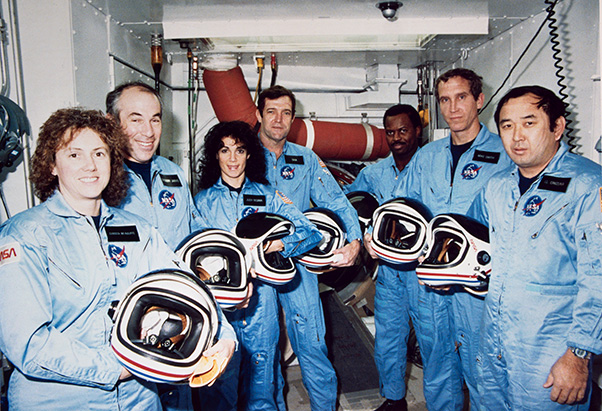 STS-51L crew members pose during a break in countdown training in the White Room at Launch Pad 39B in November of 1985. From the left are Christa McAuliffe; Gregory Jarvis, Judith Resnik, Francis “Dick” Scobee, Ronald McNair, Mike Smith and Ellison Onizuka.

The Space Mirror Memorial includes the names of the fallen astronauts from Apollo 1, Challenger and Columbia, as well as astronauts who perished in training and commercial airplane accidents. The names are emblazoned on the monument’s 45-foot-high-by-50-foot-wide polished black granite surface. It was dedicated in 1991 and since has been designated a National Memorial by Congress.

Through the Center for Space Education, AMF partners with NASA to provide space-related educational technology training to teachers and students to foster an understanding of space exploration, to improve education through technology and to improve the quality of the space industry workforce.

The STS-51L crew of Challenger included the first Teacher-in-Space participant, Christa McAuliffe, a Concord, New Hampshire, high school instructor. Also aboard were Dick Scobee, Michael Smith, Judy Resnik, Ellison Onizuka and Ron McNair, along with payload specialist Greg Jarvis, an engineer with the Hughes Aircraft Company. After lifting off on Jan. 28, 1986, the crew perished when the vehicle exploded 73 seconds into the flight. 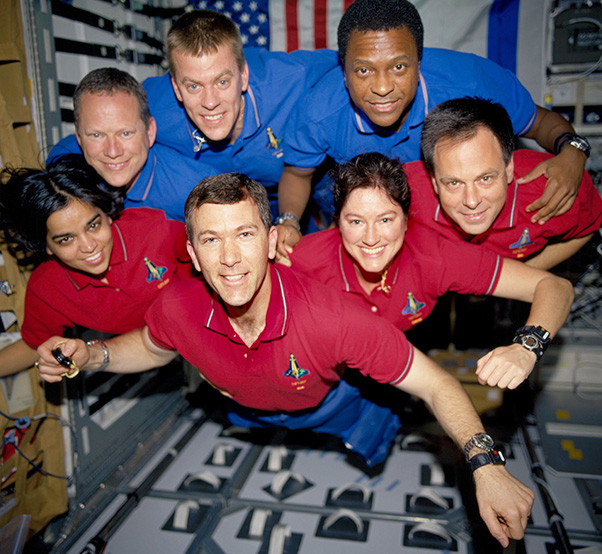 Following the ceremony, a memorial wreath was placed at the Space Mirror Memorial by Sheryl Chaffee; Lowell Grissom, brother of Gus Grissom; Carly Sparks, granddaughter of Grissom; along with Bonnie White Baer, daughter of Ed White.

Less than a month before the Apollo 1 accident, Gus Grissom completed the first draft manuscript for a book titled “Gemini” about the program that bridged Project Mercury to Apollo. On the last page, he wrote about the hazards of human spaceflight.

“There will be risks, as there are in any experimental program,” he said. “But I hope the American people won’t feel it’s too high a price for our space program.” 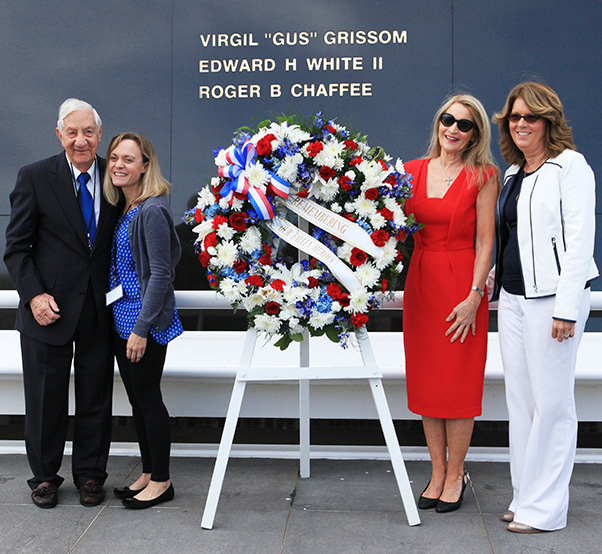 Following the Kennedy Space Center’s NASA Day of Remembrance ceremony, a memorial wreath was placed at the Space Mirror Memorial by family members of the Apollo 1 crew. From the left, are Lowell Grissom, brother of Gus Grissom; Carly Sparks, granddaughter of Grissom; Bonnie White Baer, daughter of Ed White; and Sheryl Chaffee; daughter of Roger Chaffee. They are standing in front of the Space Mirror Memorial which includes the names of the fallen astronauts from Apollo 1, Challenger and Columbia, as well as the astronauts who perished in training and commercial airplane accidents. The names are emblazoned on the monument’s 45-foot-high-by-50-foot-wide polished black granite surface.