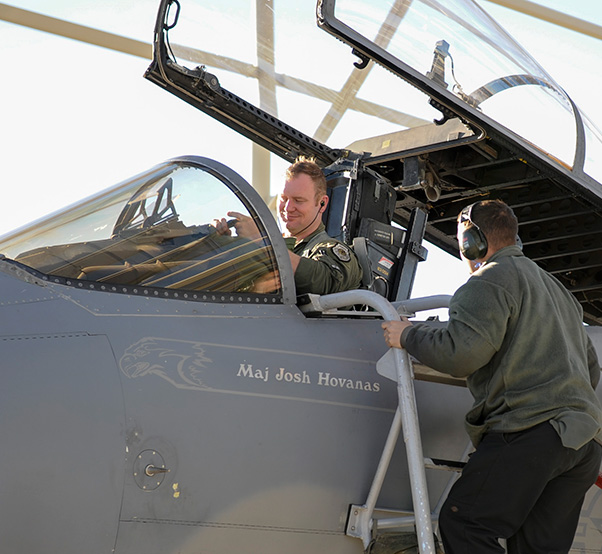 She’s more than 60 feet long and stands about two stories tall. She’s been many different colors — she’s currently grey — and shades of her past ‘lives’ can still be seen all over her body.

“I’ve probably put in about 80 hours with her over the last two years and she’s just a great jet,” said Maj. Cody Clark, 433rd Weapons Squadron pilot and aircraft 83-3014’s milestone sortie pilot. “It’s a testament to the maintenance personnel that they could keep a jet performing for so long at the level at which she does.”

The aircraft came to Nellis AFB in July 2010 from Langley AFB, Virginia, and flew here as an aggressor — a “Red” force aircraft that replicates tactics and techniques of potential adversaries against “Blue” forces — before being transferred to the 757th Aircraft Maintenance Squadron’s Eagle Aircraft Maintenance Unit and flown in support of U.S. Air Force Weapons School and 422nd Test and Evaluation Squadron operations.

While stationed at Langley AFB, Va., the aircraft deployed multiple times and was flown in operations Southern Watch and Northern Watch. 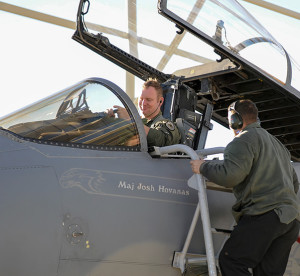 The F-15s initial operational requirement was for a service life of 4,000 hours. Following successful airframe structural testing, the F-15C was extended to an 8,000-hour service life limit and was extended further because of the need for air superiority.

“To get to 10,000 flight hours means probably a couple hundred thousand maintenance hours have been put in,” said Master Sgt. Joseph Romero, Eagle AMU lead production superintendent. “So for over 30 years, day-in and day-out, maintainers have done everything asked of them and more to get the aircraft to this point.

“Normally, 10,000 flight hours is only seen within combat-coded units,” Romero said. “Everybody in Eagle AMU has touched this aircraft, so if it wasn’t for their work, and the work of M1 Support Services, this jet would never have reached 10,000 hours.”

The next closest F-15 to 10,000 hours at Nellis AFB is also housed at Eagle AMU and currently has a little more than 9,000 hours. But with each of the unit’s F-15s currently averaging 120 hours a year, the aircraft may not reach the 10,000-hour milestone. 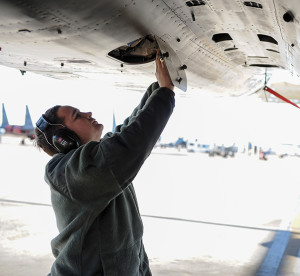 “Even though she’s old she’s been continually improved over the years to keep up with emerging threats,” Clark said. “A new aircraft that rolls off the line might have that ‘new jet’ smell, but it’s not much different per say because this aircraft is so well maintained.

“As new enemy airframes roll off the line, I’d still put her up against them any day.”

In true Nellis AFB fashion, aircraft 83-3014, her pilot, and her crew celebrated the milestone by getting her ready for her next sortie about two hours after she hit 10,000.