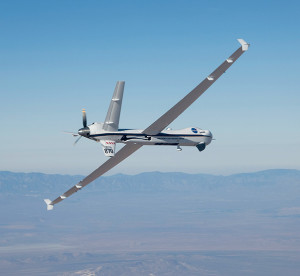 The Ikhana aircraft is flying a TAMDAR Edge probe that could significantly improve weather models and forecasts.

A weather probe that eventually will relay atmospheric conditions as they are unfolding and provide data to improve weather forecasts and models, has begun to fly on NASA’s Ikhana remotely piloted aircraft.

The flights mark the first time that the Panasonic Tropospheric Airborne Meteorological Data Reporting, or TAMDAR, Edge probe system has flown on an unmanned aircraft system as large as the Ikhana, said Ed Diks, Ikhana deputy project manager. The Ikhana flights are based at NASA Armstrong Flight Research Center in California.

“The weather information can benefit any kind of commercial or military aircraft and it could have uses for unmanned aircraft systems in the future,” Diks said.

The TAMDAR Edge system is a miniaturized, lightweight version of the TAMDAR Edge probe that has been flying on commercial airliners for more than 12 years. Panasonic Weather Solutions and Armstrong have partnered under the Space Act Agreement to develop the technology to greatly enhance flight safety involving weather, Diks said.

“Weather is vital to our safe operation of this aircraft,” Posada said. “We adhere to strict airspace rules and manufacturer limits and seeing weather and being able to avoid it is a plus.”

“We will verify that we can transmit data and that the recipients of the data can read it,” he explained. “At the moment we have to land, download the data and then complete the analysis. The best operational use for the developers of the system would be to access that information whenever they want it and help develop weather models to make better predictions,” Diks explained.

The benefit to aviation increases in remote areas without major airports that NASA Armstrong missions take place, where there is little or no local weather data, said Scott Wiley, a NASA Armstrong meteorologist.

The TAMDAR Edge probe provides a way to provide weather data that is not available through traditional weather collection tools.

“Meteorologists use the weather data from a number of sources to gather temperature, pressure, wind speed and direction,” Wiley explained. “That data, surface data and radiosonde (sensor packages that usually travel through the atmosphere on weather balloons to gather weather details) data are incorporated into the weather model to come up with a forecast. We are not just forecasting for the surface, but also aloft. Other than the radiosondes that go up twice a day, we really don’t get a lot of airborne data.” 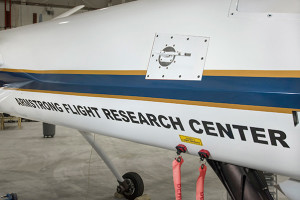 The TAMDAR Edge probe seen in the middle of the NASA Armstrong Ikhana is flying on a large remotely piloted aircraft for the first time.

“Moisture is to the atmosphere as gasoline is to a fire,” Wiley explained. “We need the moisture data. An unstable atmosphere will result in a thunderstorm if we have met the threshold level of moisture, but if we don’t we don’t have a storm. You don’t have to guess with TAMDAR data Conventional weather data from modern aircraft do not often report moisture.”

It also could have a role in NASA’s Unmanned Aircraft Systems in the National Airspace System, or UAS in the NAS. Weather observation is the primary use now and although the probe will be collecting data during upcoming UAS in the NAS missions, it will not directly contribute to that effort or have connectivity with the Iridium satellite network, Diks said.

Another improvement to the TAMDAR Edge probe for NASA research is a heated probe, Wiley said. If a pilot encounters icing, the TAMDAR probe could be a backup detector. In fact, NASA Armstrong and NASA Glenn Research Center in Cleveland are considering working together to test the probe in Glenn’s icing wind tunnel to determine quantitative icing characteristics of trace icing, moderate icing or severe icing using the probe.

“We want to develop a dropsonde capable WHAATRR glider that would be dropped into weather hazards from the TAMDAR Edge equipped DC-8 and Global Hawk,” Wiley said. “The WHAATRR Gliders would fly in areas too dangerous for aircraft, while the Global Hawk and DC-8 motherships would fly all-around and especially upstream of the hazards and providing valuable data used to forecast changes in intensity, motion and size. Current costs of evacuating a coastline for hurricane warning costs $1 million a mile. Forecasting the exact hurricane landfall would save a lot of money for cities, states and emergency services.”

More pieces of X-59 coming together