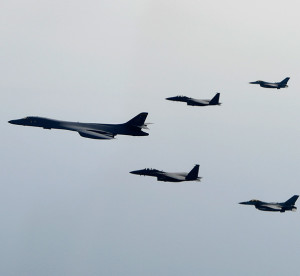 A U.S. Air Force B-1B Lancer flies in formation with South Korean F-15K Slam Eagles and F-16 Fighting Falcons in the vicinity of the South Korea, March 21, 2017. The sortie was carried out as part of U.S. Pacific Command’s continuous bomber presence mission.

The purpose of the training was to foster increased interoperability between Japanese and U.S. aircraft. Participating in bilateral training enables the operational units to improve their joint capabilities and tactical skills while also building bilateral confidence and strong working relationships.

“Bilateral cooperation with bomber aircraft, especially in the face of security challenges in the Indo-Asia-Pacific region, is an outstanding demonstration of the U.S.’s commitment to our allies,” said Air Force Maj. Ryan Simpson, the bomber operations chief for Pacific Air Forces. “Our increased cooperation enables our combined forces to rapidly react to counter aggression against Japan and other allies and partners.”

Training engagements like these demonstrate the strength of the fellowship between Japanese and U.S. airmen.

“Working and training side-by-side our [South Korean] partners increases our ability to integrate air operations more effectively in order to deter aggression in the region,” Simpson said. “As an added bonus, [South Korea] offers an excellent training environment for increasing the capability of our bomber crews.”

The B-1B’s rotational bomber presence allows U.S. forces to integrate with aerial platforms from our allied nations and take advantage of opportunities to advance and strengthen the long-standing military-to-military relationships in the Indo-Asia-Pacific region.