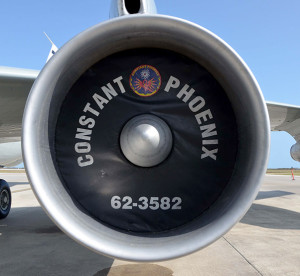 One of the Air Force’s most intriguing aircraft was on display at Patrick Air Force Base, Fla., Feb. 14, 2017, to give members of the Air Force Technical Applications Center a chance to get a glimpse of its inner-workings.

The WC-135 Constant Phoenix, AFTAC’s atmospheric sampling platform, flew from its home base, Offutt AFB, Neb., with its cockpit crew from the 45th Reconnaissance Squadron and its special equipment operators from AFTAC’s Detachment 1, also stationed at the Nebraska base.

While its operational mission falls under the center’s command, many of those assigned in Florida rarely get a chance to see the aircraft in person, much less tour it.

More than 450 personnel funneled through the jet, which started with a close-up view of the cockpit, then moved through the body of the plane, where 9S100s (the Air Force specialty code that identifies special equipment operators) described how they collect debris during missions and prepare it to be processed for lab analysis.

“The folks out at Offutt are charged with operating the only aircraft in the Air Force inventory that is solely responsible for conducting nuclear debris air sample collections,” said Leiss. “The WC-135s crew is ready to deploy 24/7 anywhere in the world to conduct its nuclear treaty monitoring mission.” 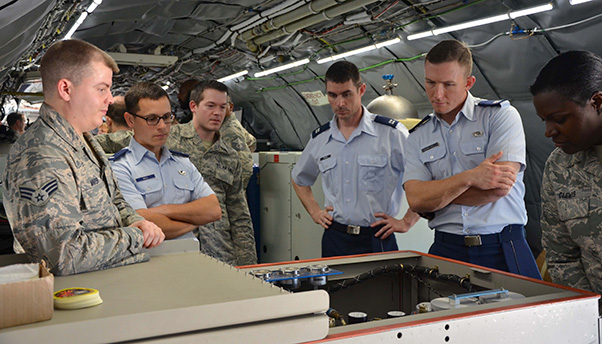 Senior Airman Tristan Marsh (left), briefs a group of visitors on the capabilities of the WC-135 Constant Phoenix Feb. 14, 2017. The jet was on display at Patrick AFB, Fla., for members of the Air Force Technical Applications Center and the 45th Space Wing. As people made their way through and around the aircraft, crewmembers discussed the features and capabilities of the atmospheric collection suite, which allows the mission crew to detect radioactive ‘clouds’ in real time.

Constant Phoenix flies in direct support of the U.S. Atomic Energy Detection System, a global network of nuclear detection sensors that monitor underground, underwater, space-based or atmospheric events. As the sole agency in the Department of Defense tasked with this mission, AFTAC’s role in nuclear event detection is critical to senior decision makers in the U.S. government.

“Our aircraft is equipped with external flow devices that allow us to collect airborne particulate on filter paper and a compressor system for whole air samples,” said Wilkens. “The particulate samples are collected using a device that works like an old Wurlitzer jukebox. An arm grabs the paper from its slot and moves it to the exterior of the fuselage. After exposure, it is returned to the filter magazine where a new paper is selected for use. It’s a simple, yet very effective, concept.”

One of the visitors who toured the plane was David Campbell, a laboratory supply manager at AFTAC’s Ciambrone Radiochemistry Lab.

“I’ve been aboard a KC-135 before, and I wanted to see the differences for myself,” said Campbell. “I was really impressed with the important job the young Airmen have since they’re the ones directing the commissioned flight crew to where they need to fly when they’re on a mission. I also learned how tedious and time-consuming it is to load the air canisters on board and collect the samples for analysis. As a member of the lab that receives samples, it was definitely pretty cool to see where they come from.”