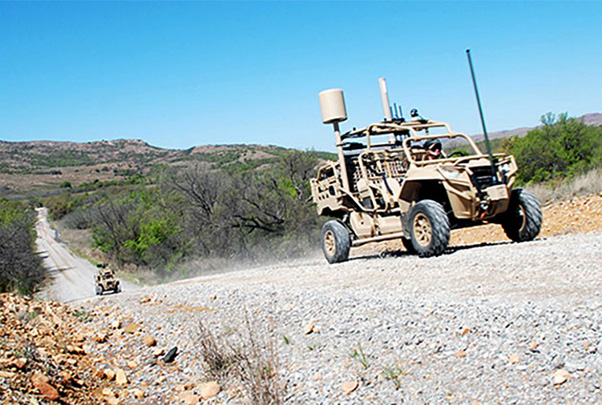 The Hunter (right) and Killer vehicles drive up a road toward the experimentation area of the Maneuver Fires Integrated Experiment (MFIX), April 3, at 2017, Fort Sill, Okla.

As technology advances, so too does the need for Soldiers to be able to multitask without forfeiting their primary duty. With new multi-domain platforms, the Army hopes to give Soldiers the equipment to handle the added responsibility.

One such new platform, called “Hunter” and “Killer,” is undergoing testing during the 2017 Maneuver Fires Integrated Experiment (MFIX) from April 3 to 13, here at Fort Sill. The vehicles resemble a dune buggy — a large-wheeled vehicle designed for various types of terrain. But the Hunter and Killer are also designed to track aircraft, perform three-dimensional fires targeting and provide other capabilities.

The vehicles are modular by design, meaning developers can take pieces from other systems and combine them on a single platform. The intent is to make parts interchangeable, according to Scott Patton, science and technology strategist for the U.S. Army Aviation and Missile Research Development and Engineering Center (AMRDEC) battlefield operating systems suites team.

However, this system, like many others experimented on at MFIX, is only in its infancy. The Hunter and Killer vehicles were just a concept on a PowerPoint slide back in August and September of 2016, according to Patton, who helped design the Hunter and Killer.

“We came from the last MFIX and a lot of the feedback we got was, ‘Hey we love [counter-UAV mobile integrated capabilities], and we like the dismounted kit, but how do you move it?'” Patton said. “‘How do you airdrop it? Can we move it somewhere rapidly for the light fighters?’ So we took that challenge, went back to the lab and came up with a design, and we got the vehicles to them in October.”

Patton said the vehicles are designed with units like the 82nd Airborne and 101st Airborne in mind. He hopes the design will prove to be air mobile on helicopters with the ability to be airdropped.

For forward observers, Soldiers who advance to the enemy’s edge and sometimes beyond, technological advances mean new risks and new responsibilities. In addition to their primary duties of gathering intelligence and relaying it back, they may now be called upon to perform precision fires. With the increasing use of unmanned aerial vehicles, they may be asked to intercept UAVs on the battlefield.

With all these challenges in mind, the designers of the Hunter and Killer are experimenting during MFIX 2017 with the platform’s ability to operate with minimal human instruction.

“We want to see how we can automate the software to reduce the task-saturation of the Soldier,” Patton said. “We want to reduce their workload. We want [Soldiers] just to be forward observers. If they have to get into these other domains, they can do it for a minute or two, let the software do the thinking for them, and then they go back to their domain.”

The platform is meant to fight in multiple domains. For land, the Hunter platform could call precision fires in an automated fashion, and for air Soldiers could use the platform to communicate with an aircraft for support. When performing for maritime, a forward observer could call for an attack from a ship to a target.

The Killer platform adds the ability to fight in the cyber and space domains. A Soldier could request a cyber call to disrupt communications between a UAV and its operator. Soldiers would also be able to call on space-based capabilities.

During MFIX 2017, Patton said, the users and testers of the platform are contractors, but there are plans to put a product in Soldiers’ hands by 2018.

“What happens in one theater will be different in another theater, and the rules of engagement may be different. We want to be able to plug those ROEs in — what they can do, what they can automate — and then put the human in the loop when necessary. That’s the objective. We’re not there yet.”