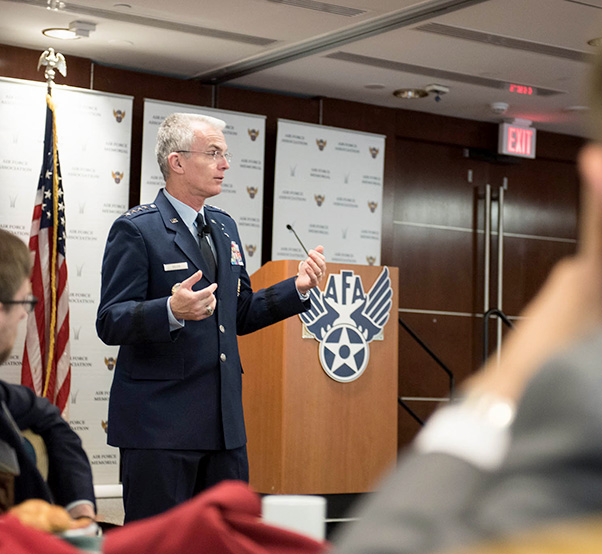 The Defense Department desires Congress to pass a regular DoD budget instead of requiring the department to operate under a continuing resolution, Air Force Gen. Paul J. Selva, the vice chairman of the Joint Chiefs of Staff told attendees at an Air Force Association breakfast in Arlington, Va., April 13, 2017.

Speaking at an Air Force Association breakfast in Arlington, Va., April 13, the vice chairman of the Joint Chiefs of Staff expressed his desire for Congress to approve the proposed Defense Department budget and to not require the department to be funded through a continuing resolution.

He said the congressional authorizing committees have done their jobs — they have passed legislation giving the Defense Department the authorizations to recruit more members, buy more equipment, fund more operations or build more capacity. But the appropriations committees — the committees that actually put dollars to capabilities — have been deadlocked.

“If the appropriators do not fund the aspirational statements in the Authorization Act, they cannot become reality,” Selva said. Extending the current continuing resolution does not help much, he added, because it funds the department at last year’s levels.

Continuing resolutions are “destructive to the way we do business” at DOD, the general said.