Over the past 60 years, winter flying missions have provided a significant contribution to how the National Science Foundation conducts scientific research in Antarctica.

Citizen Airmen assigned to the 446th Airlift Wing and active-duty Air Force members assigned to the 62nd AW formed blended aircrews to deploy as part of the 304th Expeditionary Airlift Squadron who provide airlift to the Antarctic in support of the NSF-managed U.S. Antarctic Program.

“The 446th Operations Group performed at a high level of expertise this season,” said Senior Master Sgt. Derek Bryant, a 446th Operations Group loadmaster. “Every aircrew member should know that they laid a foundation that the NSF is now building upon and the mid-winter missions coupled with our NVG capability have launched us into a new era for ODF.”

Despite the difficulty of operating in an austere environment, the 166 total force personnel deployed from Joint Base Lewis-McChord, Wash., airlifted 1.8 million pounds of cargo and transported 2,992 passengers into the Antarctic, logging a total of 393 flight hours.

“The new McMurdo-Phoenix Airfield was validated and approved for C-17 and wheeled aircraft operations,” said Lt. Col. Robert Schmidt, the 304th EAS mission commander and 62nd Operations Group deputy commander. “The new field replaces Pegasus field, which has experienced several seasons of melting, and is expected to remain in use beyond 2030.” 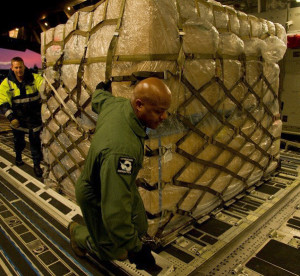 Community outreach was a highlight for this season as well. The mayor of Christchurch, Lianne Dalziel, presented the 304th EAS with a civic award for supporting local charities. Aircrews supported New Zealand’s yearly IceFest — a unique festival, with over 4,500 attendees, highlighting New Zealand’s leadership in Antarctica and the Southern Ocean — with a C-17 static display.

Planning for the next season will include continued refinement of the mid-Austral schedule as well as supporting NSF future requirements.