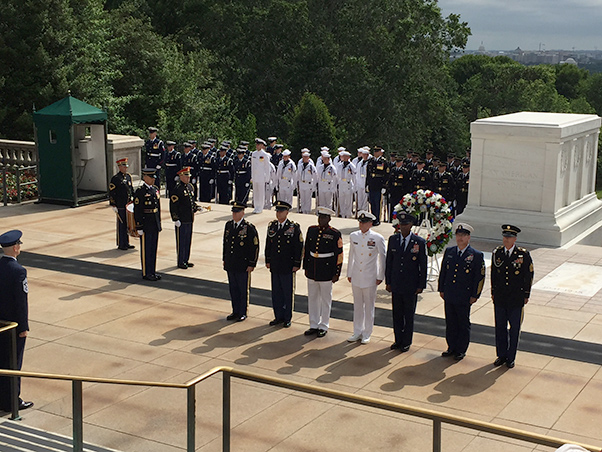 Senior enlisted leaders place a wreath at the Tomb of the Unknowns at Arlington National Cemetery, Va., May 20, 2017, in honor of Armed Forces Day.

The senior enlisted leaders of the Defense Department and the Coast Guard placed a wreath at the Tomb of the Unknowns at Arlington National Cemetery May 20 to mark Armed Forces Day.

The fact that it was an all-enlisted review is nothing new to Troxell. “This is what we do as an empowered enlisted force: we operate under commanders’ intent to do the mission,” Troxell said.

“NCOs do this every day around the world. Having my battle buddies out there with me is huge in showing the importance of the enlisted force,” he added. 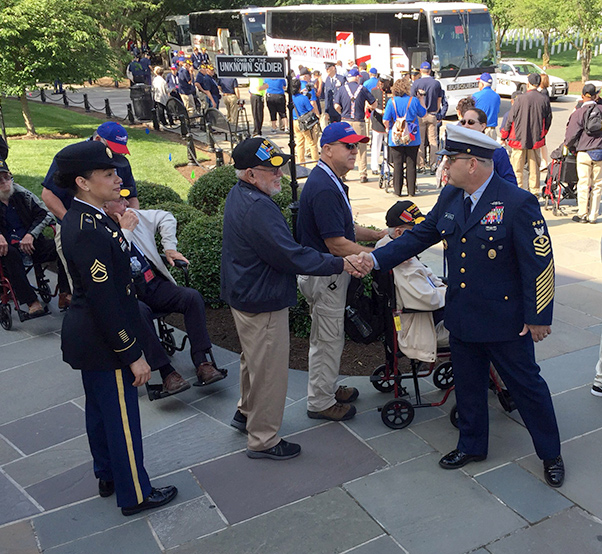 “Meeting the guards was impressive,” Cantrell said. “Meeting them and hearing their stories is a treat. While we’re not part of DOD, we are very proud to be members of the joint force.”

The senior enlisted leaders then went back to the tomb to watch the changing of the guard, presided over by Army Staff Sgt. Ruth Hanks of the 3rd Infantry Regiment , The Old Guard.

Chance meeting with veterans
As the senior enlisted leaders arrived for the ceremony, they serendipitously met veterans from an Honor Flight from Midland, Texas. The veterans were from World War II, Korea, Vietnam and Desert Storm, and Iraq and Afghanistan vets were helping their older compatriots. Two of the veterans charged ashore at Normandy, France, on D-Day, June 6, 1944.

After meeting the senior enlisted leaders, one of the Texas vets turned to a friend and said, “It was nice meeting them, but even after 70 years, I still get nervous meeting a sergeant major.”