The Japan F-35 FACO is operated by MHI with technical assistance from Lockheed Martin and oversight from the U.S. government.

Approximately 200 people attended the ceremony including Japanese and United States government and defense industry leaders. The ceremony highlighted the strong partnership between the Japanese Ministry of Defense, U.S. Department of Defense, MHI and Lockheed Martin.

“Seeing the first Japanese built F-35A is a testament to the global nature of this program,” said Vice Adm. Mat Winter, F-35 Program Executive Officer.  “This state of the art assembly facility, staffed with a talented and motivated workforce, enables us to leverage industry’s unique talents and technological know-how to produce the world’s best multi-role fighter.  The F-35 will enhance the strength of our security alliances and reinforce long-established bonds with our allies through training opportunities, exercises, and military-to-military events.”

The Japanese Ministry of Defense competitively selected the F-35A as the JASDF’s next-generation air defense fighter in December 2011, with a Foreign Military Sales program of record of 42 F-35As. The first four JASDF F-35As were previously delivered from the Fort Worth, Texas, production facility. Subsequent deliveries of 38 F-35A aircraft will come from the FACO here in Japan. 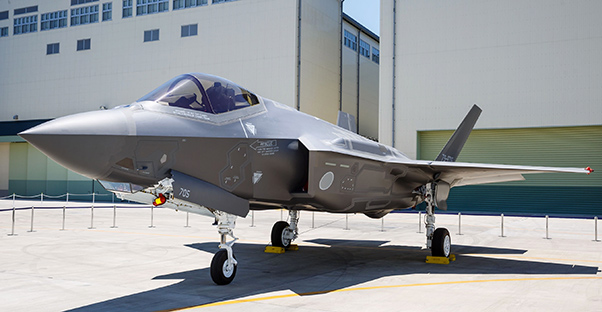 AX-5, the first Japanese-assembled F-35A was unveiled in Nagoya Japan, June 5, 2017. The aircraft was built at Mitsubishi Heavy Industries (MHI) F-35 Final Assembly and Check Out facility. The Japan F-35 FACO is operated by MHI with technical assistance from Lockheed Martin and oversight from the U.S. government.

“Building upon our enduring relationship with Japanese industry, we are fully committed to our F-35 production partnership with MHI and our support to the Japan Ministry of Defense,” Carvalho said. “The skilled workers who achieved this milestone know firsthand the F-35’s capability and how this aircraft will only strengthen the U.S.-Japan Security Alliance, thereby building upon Japan’s strategic vision to ensure the Alliance remains strong for decades to come.”