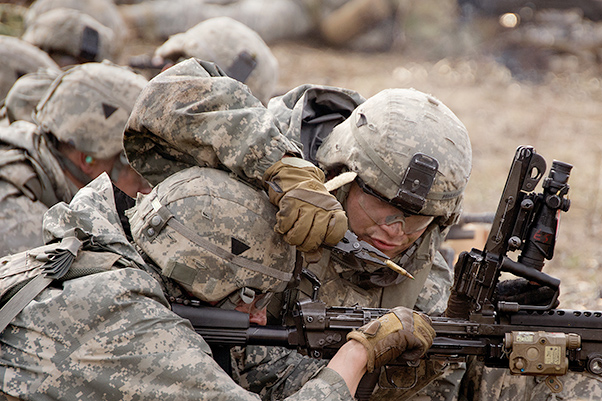 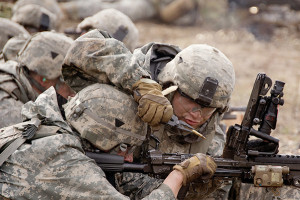 Sgt. Raul Morales removes a jammed round from an M-249 Squad Automatic Weapon during a 6th Brigade Engineer Battalion, 4th Infantry Brigade Combat Team (Airborne), 25th Infantry Division live-fire assault as part of Oak Edge, May 10, 2017, in the Donnelly Training Area near Fort Greely, Alaska. The 4/25 was one unit the Army had slated for closure. But now, thanks to an Army end-strength increase, the unit will not be closing. The 4/25th is instead back to near full strength, and is preparing to deploy this fall.

The 4th Infantry Brigade Combat Team, part of the 25th Infantry Division in Alaska, was all but shut down before recently receiving a reprieve.

End strength increases for the regular Army, spelled out in the 2017 National Defense Authorization Act — to the tune of about 16,000 active-duty Soldiers — means the 4/25th can stay open.

Other units that had been marked for shutdown, but will remain active, include the 18th Military Police Brigade Headquarters in Europe; the 206th Military Intelligence Battalion at Fort Hood, Texas; and the 61st Maintenance Company in Korea.

“These units were starting to downsize,” said Brig. Gen. Brian J. Mennes, who serves as the director of force management for the Army’s G-3 in the Pentagon. “In the 4/25th, the human resources people had stopped sending people there. When we got this great news, we started plussing them up to their full strength.”

Mennes explained that the recent end-strength increase for the Army is right in line with Chief of Staff of the Army Gen. Mark A. Milley’s No. 1 priority of readiness. The Army is hiring to fill positions, and will provide more recruiters to meet its goals.

With more manpower, the Army is going to create some new units, Mennes said. For instance, there will be three new Multiple Launch Rocket System, or MLRS battalions, each with nearly 370 Soldiers.

Those units will be placed where needed throughout the Army, in some cases bolstering existing brigades, and in other cases creating new units. In one location, an MLRS battalion had been assigned rotationally — and now, as a result of the three new battalions, that command will have a permanent MLRS battalion. Mennes also noted that this means there will be one additional MLRS battalion inside the United States, full-time, that Gen. Milley “can use for flexibility.”

These new MLRS battalions will use advanced rocket systems, such as the M270 Multiple Launch Rocket System, which is mounted on a Bradley chassis, Mennes noted.

There will also be an air defense unit of about 465 Soldiers that use the Avenger system, which is a Stinger-based air defense platform. That system is mounted on a Humvee.

With the increase in personnel, Mennes said the Army will now need more gear to equip those new units.

The Army also plans to build two Security Force Assistance Brigades, or SFABs, each with about 530 Soldiers. If end strength continues to go, the Army has plans to build up to six SFABs, Mennes said.

Those SFABs — the first of which launched earlier this month — are meant to conduct, advise and assist missions exclusively overseas. Soldiers in those units will be provided foreign language training, as well as training in the use of foreign weapons. SFAB Soldiers will also attend a recently established six-week Military Advisor Training Academy at Fort Benning, Ga.

Mennes said the force structure update will also include a 10,000-Soldier readiness enhancement account, which will allow units to deploy fully manned — even when some of their Soldiers need to go off to professional military education schools, or are unable to deploy for medical reasons.

“We can plus-up the units that are on a high deployment, or about-to-deploy status, to get them closer to 95 or 100 percent,” Mennes explained. “We were challenged to meet that number while allowing NCOs (non-commissioned officers) to go to school or recover from injuries.”

The readiness enhancement account will provide flexibility to the Army’s Human Resources Command to ensure units are fully manned before they deploy, Mennes said.

The plus-up of Soldiers in the active force overall is “encouraging” for the Army, Mennes said.

The general also said the Army could always use more Soldiers — and remains hopeful the Army will get them.

“We still think, based on what the national defense planning guidance is to us, the chief still assesses we are at high risk,” he said. “That would mean additional rocket units, additional armored BCTs (brigade combat teams), additional air defense capabilities.”

That will bring the total force to about 1,018,000 Soldiers, which is about 8,000 Soldiers over what the Army might have been at under previously directed force cuts.

“The nation sees that we are a high-tempo force,” Mennes said. “That we are ready, but need to continue to stress that our sole existence — why we are sitting here today — is to face our nation’s adversaries. I think [the end-strength increase] makes us more ready.”