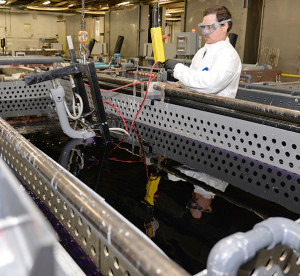 Sebastian Harrelson, an electroplater in the 309th Commodities Maintenance Group, prepares to submerge the nose gear of an F-16 at Hill Air Force Base, Utah. The organization is overhauling an increasing number of landing gear components with a more eco-friendly coating because of a new process developed by Utah-based ES3 under the Air Force SBIR/STTR Program. The coating – made possible by the new application process – has been shown to provide better protection for components and is expected to yield significant savings over the environmental cleanup needed for traditional coatings.

On the ABC television show, Shark Tank, prospective entrepreneurs receive a chance to turn dreams of a successful business into reality. Contestants present their ideas to investors – who achieved their own business success – in hopes of financial support.

The SBIR program was established by congress in 1982, with the idea to set aside a substantial amount of research and development money to be focused on small businesses.

“The idea behind it was to look for problems within organizations where creative, innovative, leading-edge solutions could solve a problem not only quickly, but could also then spark the economy by nurturing a small business to grow and become a viable U.S. national asset,” said David Shahady, director of the Air Force SBIR/STTR program.

Shahady touts a recent SBIR program success story about a small business called MMA Design LLC, of Boulder, Colorado. A recipient of the 2016 SBIR Tibbetts Award, the company has developed several new technologies through the SBIR program to help alleviate the growing problem of space junk in orbit around the Earth. MMA Design employees created a virtual chute that opens up behind a satellite in order to slow and change the orbit of the satellite after it’s no longer useful, allowing it to fall and burn up harmlessly in the atmosphere. They also designed a steerable solar panel array that allows smaller-class satellites to capture more power, allowing them to be used for longer missions, and then provides operators the ability to help steer the craft  down into the atmosphere to get it out of orbit.

“It’s exciting to be the front-end investor that puts money into these small companies and see these folks mature their businesses,” Shahady said. “MMA Design started with a small number of people and now they have an increasing number of employees, so you’re not only solving an Air Force problem, but you’re also helping to build the national economy.”

Each year, federal agencies which are part of SBIR publish announcements of their topics or problems to be solved and small businesses can submit proposals for consideration.

SBIR is a three-phased approach. In Phase I, a small business offers a concept and the AF SBIR program typically pays about $150,000 for a feasibility study. In Phase II, a company designs a prototype that can be demonstrated under a contract that is typically $750,000. From there, the intention is to move the idea into Phase III, which is where other organizations make an investment, whether it’s other government agencies, other groups from within the Air Force, or from a commercial entity outside of the government.

According to Shahady, for every company that comes through the SBIR program, the objective is to get them standing on their own with an income source outside of the SBIR program.

The STTR Program is open to partnerships between a small business and a not-for-profit research organization, such as a university. Both programs seek to solve a problem and get the result into the hands of warfighters, to save lives, cut costs and reduce time.

“Just inventing ideas and doing research that stays on the shelf is not the goal of the SBIR/STTR program. The goal is to make sure we make an impact – both economically for small businesses – and for the Air Force as an organization looking to solve problems. Small companies are agile and have the ability to make changes and contributions in innovative ways because of the creative ways they solve problems, Shahady said. 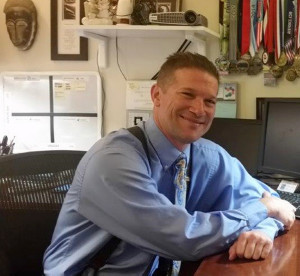 David Shahady, director of the Air Force SBIR/STTR Program, says the goal of the program is to make sure the program makes an impact – both economically for small businesses – and for the Air Force as an organization looking to solve problems.

He added, “There’s a difference between inventing something and innovating something. Inventors come up with an idea – a gizmo, a gadget, a widget, and they show it to people and say ‘Look what I invented.’ The innovators figure out how to take those kind of concepts and put them in every household or automobile in America.”

Shahady said the message he wants to sell to people is don’t be an inventor – be an innovator.

On the job for 18 months now as director of the AF SBIR/STTR Program, Shahady leads a small staff at Wright-Patterson who work with other sponsoring and managing organizations on the 200-300 AF SBIR program topics and problems published yearly. The program invests about $350 million a year in small business development with between 600-1,000 active projects going on at any one time throughout the country, represented by nearly all 50 states.

According to Shahady, a primary goal the AF SBIR program office is to solve problems of the Air Force major commands.

“What I really want to see out of the SBIR program for the Air Force is to see those major commands – those major warfighting organizations, become the focus of our problem solving so that the problems they bring to the table are the first ones we solve,” he said. “In the past, topics and problems were provided by scientists and engineers. We want to change that paradigm to where we’re really getting in touch with the warfighter and identifying what problems they have and shorten the timespan for a solution.” “Again, we’re not looking for people that just invent something and show it to us. We’re looking for the person who is going to be an innovator, who is not only going to have an idea, but who is then going to be there to help make history by putting it into the hands of our warfighters.”

For more information about the AF SBIR/STTR program, visit www.afsbirsttr.com or contact Shahady at 937-904-4392.