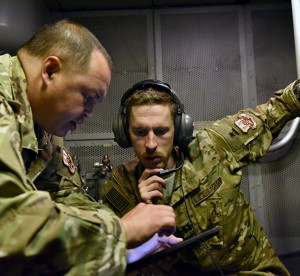 Capt. Joe, right, assists boom operator Tech. Sgt. Fritz in trouble shooting an issue in a KC-10 Extender boom pod in the air over Syria, Sept. 13, 2017. Pilots will often help to diagnose and fix minor issues mid-flight to ensure the safety of their aircraft and their crew.

Humans across generations have looked to the sky and daydreamed about the secrets hidden by the clouds.

Ancient cultures used the symbolism of wings and flight to depict the gods and to represent better things just beyond the reach of man.

Even today, children dream of flying on wings of their own, wondering what it would be like to touch the sky.

One man observed the flight of birds from one perch to another and said, “If birds can glide for long periods of time … why can’t I?” That man’s name was Orville Wright, and in 1903, he and his brother Wilbur brought our ancestors’ dream to reality with the first functioning airplane.

This leap forward in human advancement launched curiosity into the clouds and beyond to the stars. Mastery and dominance of the sky has since become a critical part of not only exploration, but in the strength and defense of nations. In this, the pilots of the United States Air Force are second to none. And while deployed, these pilots use this aerial mastery for something much bigger than themselves.

“When you take off and realize that I’m a nobody captain that they let fly this incredible piece of machinery, that’s the coolest aspect,” said Capt. “Icarus,” F-22 Raptor pilot with the 27th Expeditionary Fighter Squadron. “It’s very exhilarating and fun to be a pilot. I’m getting paid to do my hobby.”

Pilots deployed with the 380th Air Expeditionary Wing come from different walks of life, fly a variety of aircraft, and play different roles within the Air Force’s five core missions supported here. However, they all serve a common purpose.

“The team is bigger than what airplane you fly,” said Maj. Cody, U-2 Dragon Lady pilot with the 99th Expeditionary Reconnaissance Squadron. “We’re in the United States Air Force and it’s all going toward the bigger mission, no matter what cockpit you’re in.”

No matter the aircraft, all pilots go through the same primary phase of training before being selected for a designated air frame track, said Cody. Therefore, they all start with the same general skillset as their peers. 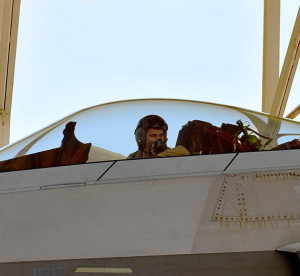 After specializing in a given aircraft, training sorties are designed to be as realistic as possible so that pilots are well prepared for their deployed mission, said Icarus.

While at home station, pilots have multiple duties beyond flying, said Capt. Joe, KC-10 Extender pilot with the 908th Expeditionary Air Refueling Squadron. While deployed, however, most pilots’ time on duty is spent with their aircraft.

“At home station, we often get torn between our office job and keeping up with flying requirements,” said Joe. “It’s pretty awesome flying wise to be on deployment.”

Each pilot’s agenda looks primarily the same. They start by being notified of a sortie, or being put on alert. Then, on the day of the sortie, they conduct mission planning and receive intelligence briefings prior to takeoff. They fly for anywhere between six and 12 hours, then return to base for down time and start the cycle all over again.

The career field does not come without its hardships, said Icarus. From dynamic mission requirements and shifting sleep schedules to physical and mental fatigue, the path of a pilot can easily take its toll on the person who follows it. No matter the difficulties, however, the career is worth it. 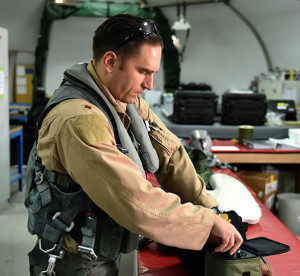 Depending on the air frame that a pilot flies, the impact of their work on the mission can be difficult to see at first, said Dave. However, the progress is there, and there are moments where it all comes into focus in the big picture.

“A strategic impact is difficult to immediately codify, and it can be difficult to stay excited about something that you can’t immediately see,” said 1st Lt. Ciara, RQ-4 pilot with the 99 ERS. “But when you take a step back and you see how in demand we are, how hard we work, and you see those little victories where you get positive feedback… when you start to piece those [moments] together, it’s awesome.”

Every aircraft’s community of operators is different, said Cody. However, each of these communities is like its own family. No matter what a pilot goes on to do in the Air Force, they will always share a close bond with their first airframe.

“If you become a pilot, whatever your airframe is, it is the greatest airframe in the entire Air Force, and it has to be that way,” said Ciara. “You have to love what you’re doing, because your community is your community and it always will be.”

Editor’s note: Names of 380 AEW personnel have been withheld for security purposes.