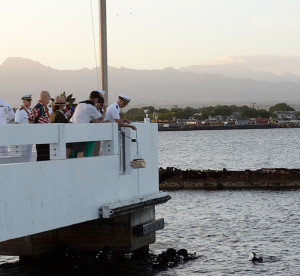 Navy Master Chief Allen Keller, command master chief for Joint Base Pearl Harbor-Hickam, Hawaii, lowers the ashes of Harry Hohstadt into the waters of Pearl Harbor during a double interment ceremony at the USS Utah Memorial as part of the 76th anniversary of the attacks on Pearl Harbor and Oahu, Dec. 6, 2017.

A sunset ceremony is held at Pearl Harbor every year to pay tribute to the crew of the battleship USS Utah, and often, to inter the ashes of recently deceased sailors who survived the ship’s sinking 76 years ago, so that they may be reunited with their shipmates already entombed inside the sunken vessel.

Service members, families and friends gathered at sunset around the USS Utah Memorial on historic Ford Island to honor victims of the Pearl Harbor attacks with a ceremony and interment service Dec. 6.

“Each year we gather to honor the 58 sailors who lost their lives when the USS Utah was hit by two Japanese torpedoes, one of the first ships to go down in Pearl Harbor that day, and we remember their sacrifice,” said Jacqueline Ashwell, superintendent of the World War II Valor in the Pacific and Honouliuli national monuments.

Ashwell opened the ceremony by recounting the harrowing story of Peter Tomich, a sailor stationed onboard the Utah at the time of the attack.

“We remember the valor of men such as Peter Tomich, who, after realizing the ship was capsizing, did not run for safety, but instead decided to stay at his post. He knew if he could stabilize the boilers, a lot of people would be able to escape with their lives,” Ashwell said. “So he stayed and allowed for others to go on to fulfill long lives. Today is particularly special. Today we celebrate the lives of two men who were able to escape the capsizing of the ship that you see behind me, thanks to the teamwork of Tomich and other shipmates.”

‘He’s home’
This year, Lt. Cmdr. Clark J. Simmons and Aviation Machinist’s Mate Harry Hohstadt were interred. Both crewmen rose to the challenge and overcame great obstacles that day and in the years that followed.

“My dad loved Pearl Harbor and he loved the USS Utah. He brought me here for the first time when I was very young,” said Claudette Simmons, daughter of Clark Simmons. “When I look at this place, I know he’s home, and I know that God has him now.” 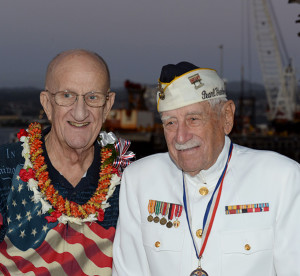 Simmons joined the Navy in 1939, a time when segregation was in full effect, making it difficult to move ahead in many career fields, including the Navy. He did not let this deter him from his goals. He received a Purple Heart after being shot by Japanese aircraft during his escape from the Utah, and after serving for 29 years, retired from the Navy as a lieutenant commander.

Hohstadt was also no stranger to adversity, being the youngest of nine children during the Great Depression. After the assault on the Utah, he saw action in many subsequent battles, including the pivotal struggle for Guadalcanal in November 1942. After being honorably discharged from the Navy, Hohstadt went on to start a large family, and owned his own business for 40 years.

‘Steadfast’ loyalty
During the ceremony, Ashwell recognized one more sailor, who has also volunteered to rise to a unique challenge presented at Pearl Harbor. Jim Taylor, a retired master chief, was honored for his work as a volunteer liaison and friend to the Pearl Harbor Survivors and their families for many years. 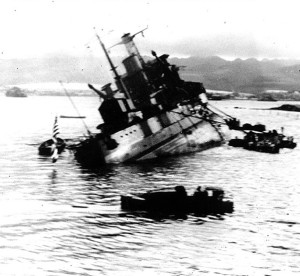 The battleship USS Utah heels to port at Pearl Harbor, Hawaii, Dec. 7, 1941. The Utah was struck by two torpedoes in the first minutes of the attack and quickly capsized.

“Today, we also would like to honor the man that does the honors, a man who has been here for 20 years, steadfast, to honor all of those who choose to return to Pearl Harbor when they die,” Ashwell said. “For the past eight years, Jim Taylor has been here to coordinate events for our Pearl Harbor survivors and ensure that the USS Utah is not a forgotten ship. The employees of the U.S. National Park Service have enjoyed partnering with you over all these years, and we have learned a great deal from you as well. We will continue in this partnership to ensure that the USS Utah is never a forgotten ship. That is our promise, that is our vow.”

The 76th anniversary events of the attacks on Pearl Harbor and Oahu, co-hosted by the U.S. military, the National Park Service and the state of Hawaii, will provide veterans, family members, service members and the community a chance to honor the sacrifices made by those who were present Dec. 7, 1941, as well as throughout the Pacific theater.

Since the attacks, the U.S. and Japan have endured more than 70 years of continued peace, a cornerstone of security and prosperity in the Indo-Asia-Pacific region. As a Pacific nation, the U.S. is committed to continue its responsibility of protecting the Pacific sea lanes, advancing international ideals and relationships, and delivering security, influence and responsiveness in the region.