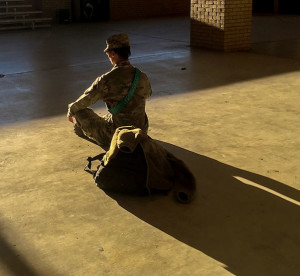 A Soldier practices meditation to relieve stress. The Army Research Laboratory has developed a new partnership with Helius Medical Technologies to launch a research program focusing on a neuromodulation stimulator that could enhance cognitive and psychological readiness through mindfulness meditation training.

The U.S. Army Research Laboratory and Helius Medical Technologies, Inc., from Newton, Penn., have partnered to expand on early research that could mean new interventions for improving Soldier readiness and resilience, as well as reducing symptoms of post-traumatic stress disorder, or PTSD.

As part of a cooperative research and development agreement, or CRADA, ARL and Helius are launching a research program to investigate Helius’ Portable Neuromodulation Stimulator for the enhancing cognitive and psychological readiness and response through mindfulness meditation training. Helius is focused on neurological wellness.

Researchers from both organizations will combine the use of the neuromodulator with mindfulness meditation training and assess participants’ neurocognitive performance and self-reported symptoms before and after training.

“Our research to date has focused on a sample of U.S. active duty service members and veterans, who are not necessarily patients, in order to determine whether meditation training might be helpful for our troops,” Rice said. “Our results have shown practical and clinically relevant reductions in PTSD symptoms, as measured by the PTSD Checklist — Military Version.”

The studies have also shown that those who complete mindfulness training, whether taught in-person or online in a virtual world, achieve significant decreases in stress, anxiety, daytime sleepiness, pain, and symptoms of inattention associated with attention deficit disorder, as well as increased energy and vigor, she said. In addition, those who score higher in mindfulness show quicker decision making speed and fewer errors on sustained visual and auditory performance tasks, than those with lower mindfulness scores.

ARL conducts a broad program of fundamental research focused on human sciences that identify and advance novel techniques and technologies that can improve cognitive, emotional and physical performance to provide new capabilities for maximizing Soldier readiness and response.

“The Soldier is the lynchpin for Army modernization,” Rice said. “Without a stable and competent Soldier, no amount of technology can improve warfighting capabilities. By coupling mindfulness meditation training with brain stimulation using this new portable simulator, we expect to see even greater gains in neurocognitive performance, retention of information, and reductions in personal stress and anxiety, than we have seen with mindfulness training alone.”

Research conducted at ARL’s Fort Sam Houston site focuses on active duty service members and veterans, rather than specifically on patients, in an effort to determine how mindfulness meditation training might serve both populations in a preventative manner by increasing resilience, improving mission performance, and strengthening cognitive and emotional readiness. In addition, ARL is examining how mindfulness meditation training assists individuals who have symptoms of PTSD or anxiety associated with their military service.

Through the meditation process, their mind begins to quiet and they also begin to see and understand their own motivations, communications, actions, and relationships more clearly, Rice said. They can then appropriately alter their approach in all aspects of their lives, in order to achieve their goals and the mission to which they are assigned. They can be fully present in whatever task or assignment they are given, without having their mind wander unnecessarily. Confidence and performance both improve under these conditions.

Rice refers to this as “developing internal situational awareness.”

“We are delighted to be collaborating with Dr. Valerie Rice and the team at the Army Research Laboratory and are looking forward to launching the clinical investigation evaluating whether the PoNS can augment the effects of MBSR training,” said Dr. Jonathan Sackier, chief medical officer at Helius. “Addressing issues such as post-traumatic stress and sleep disorders is a major problem not only in the military, but the civilian population in the wake of terrorist attacks, natural and other disasters.”

“Partnerships with companies like Helius Medical Technologies are exactly the kind of exciting opportunities that we have envisioned with ARL’s Open Campus initiative,” added Dr. Kelvin S. Oie, ARL’s senior campaign scientist for Human Sciences. “Open Campus relationships allow us to work together with innovative researchers and developers, both in industry and academia, to rapidly advance new capabilities that will help our Soldiers, today and tomorrow.”