LANCASTER, Calif.—The soldier was dying, and he knew he did not have long to live. That was why he was in hospice care.

But when a smartly uniformed senior non-commissioned officer of his service branch turned up at his bedside, the dying man slipped off the edge of the bed in his pajamas.

With tears in his eyes, he saluted smartly. The Army NCO, with plenty of medals on his chest, presented the dying soldier with an official certificate that recognized him for his service to the nation.

Meanwhile, at Antelope Valley College, a program for hundreds of veterans attending the school took on new life with the arrival of a new director of veterans’ resources.

Soon veterans at the college were partaking of MREs, but they were not the dreaded “Meals Ready To Eat.” Good pizzas, pastries and premium coffee were being served by the director who introduced the “Meet, Relax, Eat” program for veteran scholars on the G.I. Bill.

And in another case, over the years, hundreds of high school history students in a teacher’s classes at Lancaster High raised hundreds of thousands of dollars for veteran advocacy efforts.

Hundreds of supporters of troops who served in the nation’s armed forces turned out to honor Jerry Lawrence, Monteigne Long and Jamie Goodreau, while raising thousands of dollars to help the local nonprofit, Vets4Veterans, in its quest to fund scholarships for veterans, and to prevent veteran homelessness.

More than 200 people gathered Sunday evening at the John P. Eliopoulos Hellenic Center, representing dozens of sponsors who aid in the group’s annual drive to support scholarships for veterans attending Antelope Valley College, and to raise funds for veterans at risk of homelessness, or other economic emergency.

The group was started more than 10 years ago by Vietnam War veteran Tom Hilzendeger, who was seeking counseling to deal with his issues related to service in one of America’s longest and most argued-over wars.

One of the counselors at the VA-affiliated Veterans Counseling Center, Gerry Rice, suggested to veterans in a processing group that they take action to improve the lives of other veterans.

“We started with a car show, because I was always attending car shows,” Hilzendeger told the audience of veterans and veteran supporters. “It just keeps getting bigger.”

Over the years, more than $25,000 has been raised to fund scholarships for veterans in need at AV College.

With tears in his eyes, he ushered veteran therapist Rice onto the stage to give the invocation.

It was Rice, himself a combat veteran of Vietnam, who told his veteran comrades, “If you want to improve your quality of life, do something of quality for others.”

This year, the group selected for honors three local citizens who have made substantial contributions to improving the lives of veterans facing a variety of challenges.

The group honored Monteigne Long, director of the AV College Veterans Resource Center. Also honored were Marine Corps veteran Jerry Lawrence, a veterans hospice volunteer, and Jamie Goodreau, a retired Los Angeles County Teacher of the Year, who introduced her history students at Lancaster High School to the life stories of veterans ranging from World War II to the War on Terror.

Long survived her first spouse, a National Guard soldier killed fighting in Afghanistan, and afterward, married another career military man. She earned a master’s degree that enabled her to begin assisting veterans, and she made substantial improvements to the veterans’ experience at Antelope Valley College.

“I realized that this was the work I wanted to do, and these were the people I wanted to be with,” Long told the gathering at the dinner.

Long initiated a Meet, Relax, Eat program (MRE, like the military Meals Ready to Eat), “a welcoming place where veterans at the college can come, and know that they are appreciated.” She also works with AV College President Ed Knudson, and Dean Jill Zimmerman, in organizing “vet-centric” events at the college.

Lawrence, retired from work in a variety of business endeavors, turned up at ProCare Hospice several years ago, bringing some books that he said he would donate to ailing veterans in the hospice program.

“I walked out of there two hours later, and I was a volunteer,” he said.

Lawrence, a member of Marine Corps League Detachment 930, started a program in which veterans at end-of-life would be officially recognized for their service. With award certificates that were validated by the veterans’ military records, active service non-commissioned officers in full dress uniform would present the recognition.

A veteran, near life’s end, would sometimes, stand up to attention and salute.

“The important thing is to make sure that they understand they are not forgotten,” Lawrence said. “When you see a veteran, I know you will, say ‘Thank you for your service … but also say ‘You are not forgotten!’”

Lawrence added that the Marine Corps League was dedicating a scholarship in memory of Marine Corps Master Sgt. Al Cooper, a beloved member of Detachment 930.
Goodreau was recognized for her education efforts and the voluntarism that emerged from her teaching methods. 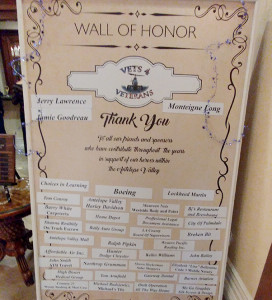 For more than 10 years, Goodreau and her history class students organized “Pride Of The Nation” dinners that would recognize veterans of all eras of conflict and service. Over the years, the students began to raise funds that would be donated to different veterans’ nonprofits and events, such as the World War II Memorial in Washington, D.C.

As a teacher, Goodreau introduced her students to dozens of World War II veterans, veterans from the Korean and Vietnam wars, and from later wars fought that were both hot and cold.

She told the audience, “Never underestimate teenagers. They will do more, volunteer more, put everything that they have into it.”

With a group that was established by a vote of the students, the “Pride” group about five years ago began a fund-raising drive that would build a functioning “smart home” with handicapped access features for Iraq War veteran Jerral Hancock, who was catastrophically wounded in Baghdad in 2007. Through the students’ efforts, more than $500,000 was raised, and within two years the home was built with an end-zone completion assist from the Gary Sinise Foundation.

“What is important to realize is that this happened because of the students’ vote to do it,” Goodreau said.

Entertainment for the evening was provided by the Antelope Valley College Jazz Ensemble, and the group auctioned off art that was created in the Vets4Veterans art therapy program.

“I look out at this room,” Hilzendeger said, “And I realize that it is all of you, all of you that make Vets4Veterans go, and I am so moved, and so grateful for all of you.”

The group continues to raise funds for a transitional housing facility to house a veteran family on a temporary basis.