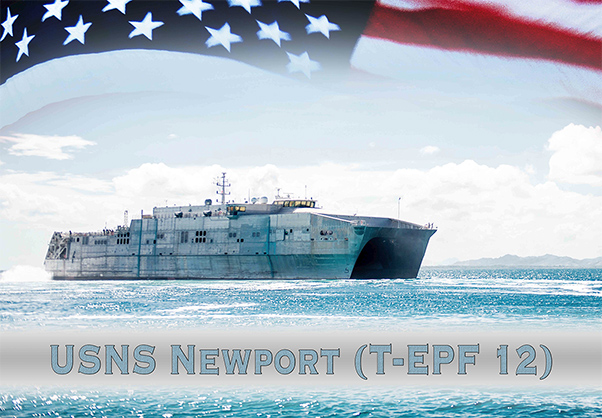 On Feb. 13, 2018, Secretary of the Navy Richard V. Spencer announced the next Expeditionary Fast Transport ship will be named USNS Newport (T-EPF 12).

This is the fourth ship to bear the name honoring the Rhode Island city. Newport is home to several Navy activities, including Naval Station Newport and the Naval War College.

The Expeditionary Fast Transport (EPF), formerly named the Joint High Speed Vessel (JHSV), is a shallow draft, all aluminum, commercial-based catamaran that is designed for High Speed Intra-Theater Surface Lift and serves in a variety of roles for the military branches to include support of overseas contingency operations, conducting humanitarian assistance and disaster relief missions and supporting special operations forces.

Austal USA in Mobile, Alabama, will build the new EPF, which will be 338 feet in length, have a waterline beam of 93.5 feet, displace approximately 2,362 tons and operate at speeds of approximately 35-plus knots.