By Bob Alvis, special to Aerotech News
Those of you who are students of history and enjoy the subject are the ones who will carry it forward to future generations.

Many times I have been in classes and listened to an instructor share history, including his or her interpretation of those events, and the question many times would come up: “What were they thinking?” (Or, “I would never do that!”)

I think it happens from time to time that some teachers fail to tell the entire story of events and to put it into some form of context to the time period.

History, to those that lived it, sure looked and felt a lot different than it does to current generations looking back at those times.

Modern scholars who take their students back to that time period, and have them study and look at it in the context of the time period and not with the values of today’s world, do a great service by giving students and history buffs a more in-depth understanding and a more valuable knowledge of the world that many today cannot even comprehend.

Case in point is my discovery of a young girl’s recollection of life here in the Antelope Valley during World War II and the changes in daily life in a nation involved in a world war, as her friends and family became part of the war effort. 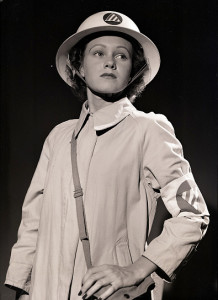 Rebecca Wise was just like any other woman of that time period who had hopes and dreams. She could not have imagined the way her life would change on Dec. 7, 1941. Family and future became secondary, as the West Coast became a victim of what would be known as “war nerves.” Citizens who had seen a brutal attack on American soil play out in dramatic newspaper headlines and limited radio messages feared the unknown enemy who, for all they knew, was lurking just off the coast of California. People were scared and concerned, and when the government came calling it didn’t relieve those concerns — in fact, it only made them worse!

Just a couple months after the attack on Pearl Harbor, a local Defense Council was formed in Palmdale and Lancaster. A training program for volunteer air raid wardens ensued and after five months, 170 valley residents graduated, including Rebecca. Guarding a nation at war was a 24- hour job. It did not include any pay or benefits — it was about being on a team of like-minded citizens doing what was best for our community and our nation. After all, everybody was sacrificing in some form or another and the Antelope Valley was no different! All over the Antelope Valley, observation posts were established and manned 24-hours a day. The citizen volunteers would take up their posts, serving in two- to four-hour shifts. Rebecca’s Palmdale home served as a site for one of the observation posts and later on, she recalled the duties of all those involved.

“Palmdale citizens came in pairs for each two hour shift during the day and the same for each four-hour shift at night. This continued on, around the clock, every day. One person kept alert, while the other reported and recorded every plane that passed over. This information was fed into a central station in the metropolitan area where it was coordinated. Sometimes civil defense would send a plane over just to see if all stations were alert and reporting. We took pride for not, what you would call, “dropping the ball” when it came to our national defense.  The families involved made it a team effort, as husbands sent wives to stand watch while they worked, then contributed personal rest time to their promised watch.” 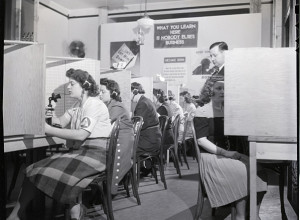 Many people do not realize that for the young during the war years, home life was nothing at all like we enjoy today. The fact that school was in session year round and every member of the family might be volunteering in support of the war effort made for a very different looking home life. Night times with blackout curtains, rationing, and very little contact with the outside world just added to the stress of the citizens, not knowing what the real danger or threat was.

The one Southern California event that showed how on edge the citizens of that time were happened on Feb. 25, 1942, when what would become known as the “Great Los Angeles Air Raid” took place.

On that night it was reported by some Los Angeles Air Wardens that enemy aircraft had been spotted over Los Angeles. With that, the skies lit up with search lights and anti-aircraft fire that rained down on the citizens of the area. Rebecca was well aware, as was every other person in the air warden training program in the Antelope Valley, that Los Angeles was under attack by the Japanese and that they could be next. Even days after the “attack” that never happened, war nerves were taking a heavy toll on the citizens. Only by focusing on your part of the war effort could you hope to find some peace of mind. News reporting was limited to newspapers and radio, and was very heavily censored at the time, in fear of aiding the enemy with critical information. You only knew what your very close-knit group was privy to.

So I just wanted to give this bit of perspective, to kind of explain how understanding our history is best done if you try to view it through the eyes of those that lived it.  Rebecca’s life during those days has no parallel with our lives today, in our modern world with instant, real time communications in our hands and pockets. The Greatest Generation didn’t get that title for just showing up, they earned it with the actions of every day ordinary citizens doing incredible things with a heavy weight on their shoulders and the unknown in the skies above them!

Until next time where I may share what it was like growing up with “duck and cover” in a nation involved in a cold war world, and how it looked and felt here in the Antelope Valley!