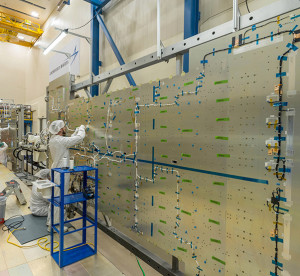 The assembly, test and launch operations team at Lockheed Martin has started production of a new commercial satellite, JCSAT-17, that will deliver flexible, high-bandwidth communications to users in Japan and the surrounding region.

The JCSAT-17 satellite, manufactured for the SKY Perfect JSAT Corporation, has entered the assembly and test cycle after completing a rigorous design and engineering phase.

Atsushi Mamiya, JCSAT-17 project manager at SJC said, “Lockheed Martin has done a great job so far. SJC maintains good cooperation with Lockheed Martin and the whole team as they work toward the successful and scheduled launch of this excellent satellite.”

“JCSAT-17’s cutting-edge flexible payload processor means that SJC can move bandwidth where it’s needed, when it’s needed, ensuring that this satellite stays agile, ready and relevant for years to come,” said Sam Basuthakur, Lockheed Martin JCSAT-17 program manager. “This is the third modernized and first Mobile Satellite Service (MSS) built on the new LM2100 platform, scheduled for launch in 2019 on Ariane-5. Both Lockheed Martin and SJC are excited to start assembly and integration of this innovative spacecraft employing LM2100 best practices and streamlined ATLO process, which will provide critical MSS communications to SJC and to the people of Japan.”

A critical stage in the program, ATLO begins with the satellite’s assembly, then moves through the environmental testing and concludes with its launch. Over the next nine months, the ATLO team will integrate subsystem equipment onto the satellite structure, including power, attitude control, propulsion, thermal control, telemetry tracking and control, mechanisms, RF payload and antennas, JCSAT-17 is the eighth satellite built by Lockheed Martin for SJC, beginning with NSAT-110, JCSAT-9 through JCSAT-13 and JCSAT-110R.