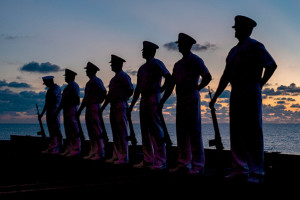 The Naval History and Heritage Command held a commemoration ceremony in honor of Vietnam War Veterans Day at the National Museum of the U.S. Navy’s Cold War Gallery located on the Washington Navy Yard, March 29, 2018.

“I think this commemoration is particularly important because when they came home Vietnam War veterans did not get the recognition for their courage and valor that they deserved,” said retired Rear Adm. Sam Cox, director of the Naval History and and Heritage Command. “Hosting this event is an opportunity to do the right thing even though it’s well overdue.”

The ceremony began with colors presented by the United States Navy Ceremonial Guard while the national anthem was sung by a member of the U.S. Navy Band.

Cox presented Vietnam veterans in attendance with a pin to recognize their service and sacrifice. Among the Vietnam veterans present was John Desselle, a civilian employee of the Naval History and Heritage Command.

“This recognition means a lot to me,” said Desselle. “When I came back from Vietnam, nobody cared to talk to us, they assumed we were crazy. Today, I was thanked for my service which truly touches me.”

The guest speaker of the ceremony was retired Lt. Cmdr. Thomas J. Cutler. He served during the time of war in Vietnam and is a well-known author and speaker. Cutler began his presentation with a photo display accompanied by music.

After the photo presentation, he spoke to the audience wearing a Vietnam War-era uniform as if it was their first day on the ground “in-country” during the Vietnam War. He gave a welcome aboard brief with guidelines and advice for service members to follow while in Vietnam.

“Listen up, you may fall asleep but this information may save your life while in Vietnam,” said Cutler.

Cutler continued the brief speaking to the audience about how to wear the uniform properly to avoid leeches, the type of assignments they could expect, the many hazards to avoid, and even the importance of taking malaria pills.

“It’s time to meet the enemy,” said Cutler as he displayed a picture of a mosquito. “Take your malaria pills. It’s better to have a year of an upset stomach, than a lifetime of malaria.”

The presentation continued with vital information pertaining to how to survive while in Vietnam. Cutler also spoke about his experience when he returned home from the war. “When I came back from Vietnam, for almost 10 years I could not talk about my experience. Nobody wanted to hear it or talk about it,” said Cutler. “Years later, now the awareness and knowledge has drastically increased and we appreciate it.”

For more information about the U.S. Navy and the Vietnam War, visit https://www.history.navy.mil/browse-by-topic/wars-conflicts-and-operations/vietnam-war0.html.
The Naval History and Heritage Command, located at the Washington Navy Yard, is responsible for the preservation, analysis, and dissemination of U.S. naval history and heritage. It provides the knowledge foundation for the Navy by maintaining historically relevant resources and products that reflect the Navy’s unique and enduring contributions through our nation’s history, and supports the fleet by assisting with and delivering professional research, analysis, and interpretive services. NHHC is composed of many activities including the Navy Department Library, the Navy Operational Archives, the Navy art and artifact collections, underwater archeology, Navy histories, ten museums, USS Constitution repair facility and the historic ship Nautilus.