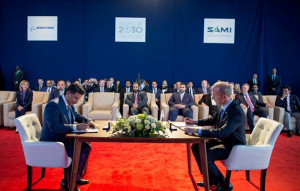 The agreement was signed by H.E. Ahmed Al-Khateeb, Chairman of SAMI, and Dennis Muilenburg, Chairman, President, and CEO of Boeing, at Boeing’s commercial manufacturing facility in Everett, Wash.

In line with Saudi Arabia’s Vision 2030 and following the announcement of HRH Prince Mohammed bin Salman bin Abdulaziz, Crowne Prince, Deputy Chairman of the Council of Ministers and Minster of Defense, to localize 50 percent of the total military spending by 2030, Saudi Arabian Military Industries and Boeing signed a Memorandum of Agreement March 30 to develop a new joint venture aiming to localize more than 55 percent of the MRO services for fixed and rotary-wing military aircraft in Saudi Arabia.

The agreement will also transfer technology to install weaponry on these aircraft as well as localize the supply chain for spare parts in the Kingdom.

Commenting on this important milestone, H.E. Ahmed Al-Khateeb, Chairman of SAMI, said, “Boeing has a long-standing commitment to Saudi Arabia, and is extremely keen on expanding its footprint in the country. Inspired by the vision of HRH Prince Mohammed bin Salman, SAMI, on the other hand, is exploring all collaborative opportunities to build a strong autonomous military industries ecosystem in the Kingdom.”

The joint venture agreement will provide sustainment services for fixed- and rotary-wing military aircraft of the KSA ?military fleet and will be the sole provider of these ?services for all military aviation platforms of ?the KSA military fleet, strengthening the Kingdom’s defense capabilities and enhancing its deterrent potential.

“We deeply appreciate the trust that the Kingdom of Saudi Arabia in general, and HRH Prince Mohammed bin Salman personally, are placing in Boeing to help deliver Vision 2030 with this new joint venture,” said Dennis Muilenburg, Boeing Chairman, President, and CEO. “Our relationship with the Kingdom dates back more than 70 years, and we look forward to continuing our successful partnership in support of the Kingdom’s national security and aerospace industry needs.” 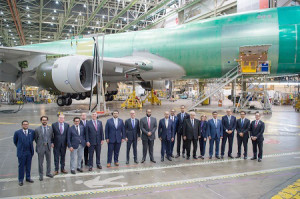 The MoA will further solidify the enduring relationship between Boeing and Saudi Arabia and result in the development of local research, design, engineering, manufacturing, and MRO abilities. The JV will continuously improve performance and growth, upgrade the readiness of and increase confidence in the Saudi military fleet, enhance maintenance capabilities, and reduce support costs throughout the fleet’s life. In addition, the agreement will create 6,000 jobs and training opportunities for Saudi youth, support local content, improve Saudization levels in the industry, and assist towards achieving the ambitious Vision 2030 plan.

Dr. Andreas Schwer, CEO of SAMI, added, “The significance of the MoA, which is signed today, will enable SAMI and Boeing to play a key role in leading and laying the foundational framework for Saudi’s defense sector industrialization, in line with the goals of the Kingdom’s National Transformation Program and Vision 2030. In addition to local sustainment capabilities, the inevitable partnership between the two companies could explore the creation of intellectual property as well.”

Once the MoA is operational, the joint venture will provide a foundation for future platform sales and for expanding Boeing’s presence in the Kingdom to support market growth for both commercial and defense programs.

Leanne Caret, President and CEO, Boeing Defense, Space and Security added, “With this local capability dedicated to sustaining all U.S.-made defense platforms, we can better serve our customers and support the Kingdom’s goals of localization and economic growth.”

Boeing’s partnership with Saudi Arabia dates back to more than 70 years and is growing from strength to strength. It began on February 14, 1945, when U.S. President Franklin D. Roosevelt presented a twin-engine Dakota DC-3 airplane (manufactured by Boeing’s heritage company Douglas Aircraft) to King Abdulaziz Al Saud. This event marked both the beginning of the Boeing relationship with Saudi Arabia and the birth of commercial air travel in the Kingdom.