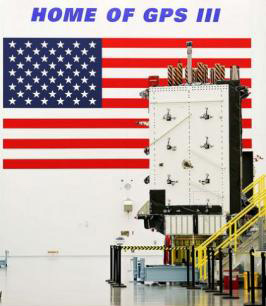 Lockheed Martin has submitted a competitive and fully compliant proposal for the U.S. Air Force’s GPS III Follow On program, which will add enhanced capabilities to the most advanced GPS satellites ever designed.

The GPS IIIF program intends to produce up to 22 next-generation satellites.

The Air Force’s first 10 GPS III satellites, currently in full production at Lockheed Martin, are already the most powerful GPS satellites ever designed. GPS III will have three times better accuracy and up to eight times improved anti-jamming capabilities. Spacecraft life will extend to 15 years, 25 percent longer than the newest GPS satellites on-orbit today. GPS III’s new L1C civil signal also will make it the first GPS satellite to be interoperable with other international global navigation satellite systems, like Galileo.

* The biggest feature of GPS IIIF will be a Regional Military Protection capability, which will increase anti-jam support in theater to ensure U.S. and allied forces cannot be denied access to GPS in hostile environments.

* Additionally, the U.S. government will provide each GPS IIIF with a new Search and Rescue payload. These hosted payloads, spread around the globe on GPS IIIF satellites, will make it easier for first responders to detect and respond to emergency signals.

“When we developed our design for the first 10 GPS III, we used a flexible, modular architecture that would allow for the insertion of modern technologies and new Air Force requirements in a low-risk manner,” said Johnathon Caldwell, Program Manager for Lockheed Martin’s Navigation Systems mission area. “In addition, our GPS IIIF solution is based off a design already proven compatible with both the Air Force’s next generation Operational Control System and the existing GPS constellation.”

In September 2017, the Air Force declared Lockheed Martin’s first GPS III satellite “Available for Launch.” GPS III Space Vehicle 01 (GPS III SV01) is in storage waiting for the Air Force to call in up for launch.

GPS III SV02 completed rigorous Thermal Vacuum testing in December 2017, is currently in its final environmental testing, and is expected to be declared AFL in summer 2018.  GPS III SV03 was fully integrated in fall 2017 and recently began TVAC, and SV04 was recently integrated in anticipation of environmental testing later this summer. GPS III SV05 has now received its navigation payload and is in final vehicle build up. Not far behind, GPS III SV06 has begun its initial build with GPS III SV07 also planned to begin production this spring.

To date, more than 90 percent of parts and materials for all 10 satellites have been received, from more than 250 aerospace companies from 29 states, to help ensure GPS III maintains the gold standard in position, navigation and timing.