Testing began late February, and according to Randall G. Fincher, JLTV test officer with the U.S. Army Operational Test Command (USAOTC), 39 JLTVs in two variants of Combat Tactical Vehicle and Combat Support Vehicle were split, with 18 going to the Marines and 21 to the Army test units.

“The Marines and the Army were equipped with both variants in the following mission packages: Heavy Guns Carrier, General Purpose, Close Combat Weapons Carrier, and the Utility version,” said Fincher.

The biggest advantage to testing was the almost unreserved size of the MCAGCC training area and its harsh terrain, providing a true test of the vehicle’s maneuverability.

“The terrain I see out there, is very indicative of what a Soldier or Marine would see in southern Afghanistan,” he continued.

“It’s absolutely the conditions the JLTV will be operating in, real-world, based on past deployments and the strong possibility of areas we will operate in for the foreseeable future.”

“It’s a joint vehicle,” he said. “We used the Marines, who picked the company they thought would use the JLTV on a frequent basis. And, for the Army, the Recon Troop was perfect because of the number of JLTVs we wanted to test in a variety of missions that we project the JLTV might be operating under.” 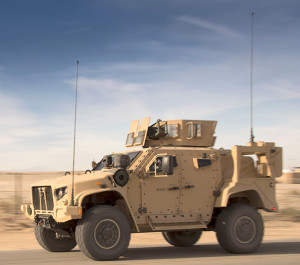 Operationally realistic scenarios allowed the test unit Marines and Soldiers to tell the Department of Defense how well the system supports their mission execution.

For the Marines, live fire and helicopter sling load operations, as well as a Marine Amphibious Landing mission at Camp Pendleton, Calif., were added to testing.
One combined anti-armor team section leader Marine who has been deployed to Iraq twice, said training during JLTV testing was beneficial.

“In terms of everything we did specific to Twentynine Palms and the combat center here — all of the scenarios — we’re pretty much experts at,” said Marine Sgt. McLennan S. Janes. “That’s all we do. That’s our bread and butter, in terms of movement to contact and conducting deliberate attacks, defense in-depths, and conducting raids and clearances.

“The things exclusive to JLTV testing included the amphibious landings and sling loads by helicopter that we never get to do.”

The 101st Airborne Division Soldiers from Fort Campbell, Ky., compared the MCAGCC terrain and size to much smaller training areas at their home station.

“It’s not very often my Troop gets to go out anywhere for an extended period of time and train mounted tactics, especially in this kind of terrain,” said Capt. Michael D. Rodriguez, Bravo Troop commander. “It’s just not what’s at Fort Campbell.”

Rodriguez said a Mounted Cavalry Troop is required to spread out over distances up to 15 kilometers and be able to shoot, move and communicate.

“The main thing we can’t get at Campbell that we can get out here is the ability to do our mission over a great distance,” he said.

“At Fort Campbell, we come right up on our pretend enemy and get into a direct engagement with them. That’s good training, but it helps to be out here for my Soldiers to be able to see how big the battlespace is that we are required to cover as a Mounted Troop.”

Rodriguez also said he welcomed the opportunity to be involved in an operational test without the normal distractions at home station.

“I was able to look at all of my Soldiers and say, ‘Hey, your job is scouting for the next two months.’ That’s pretty valuable,” he said.

One of Rodriguez’ platoon leaders said the training experience during the JLTV test will go a long way for him and his Soldiers.

“Traversing in new terrain which is unfamiliar is just like being on a deployment and it’s a good experience for all of us,” said 1st Lt. Mike D. Towery. “Now, we have this knowledge base of what it’s like to maneuver in a desert environment, which will most likely be coming up for us, so now we have that experience in our back pocket.

“We now know the best way to maneuver these vehicles, and especially for myself, I will know how to maneuver a platoon in this type of desert environment.”
The operational test’s purpose is to collect data to be used to address operational effectiveness, suitability and survivability of the JLTV in its intended environment, according to Fincher. 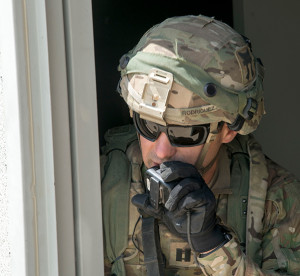 The Soldiers and Marines felt their opinions were being listened to and considered when test officers solicited their feedback.

“It is a good opportunity to be able to work out the kinks, and provide the future generations in the Marine Corps with a vehicle that is going to be able to operate efficiently in combat,” said Janes.

“After every test after action review, I would write about three pages and submit about 20 comment cards per week,” said Staff Sgt. Matthew A. Smith, 2nd Platoon Sergeant for the 101st’s Bravo Troop.

With 9-and-a-half years as a Cavalry Scout and five wartime deployments, Smith was content with giving his opinion on what works and what does not work with the JLTV.

Smith said that while USAOTC Commander, Brig. Gen. John C. Ulrich was on the ground April 10, he felt the general listened to him with great concern.
“A lot of the comments that I’ve made have been brought up,” he explained.

“I was actually able to talk with the general one-on-one about some issues I addressed during data collection,” said Smith. “They’re definitely taking our recommendations.

“It seems like they want to make this the best vehicle possible, so they’re like, “Hey, here is what we’ve designed. What do we need to improve upon?'”

Smith said a lot of his Soldiers are young, and outside of JLTV testing, his troops got lots of training on battlefield operations.

“So, to come here, we have a 100-kilometer square that we can operate in and we’re out here with 20 vehicles fighting as a unit. Space is something that’s limited at Fort Campbell because there’s trees everywhere, and you can’t put every vehicle in the Troop out there and be able to fight a threat like you can here.”