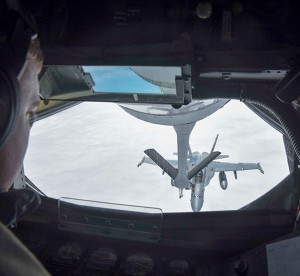 A KC-135R Stratotanker assigned to the 6th Air Refueling Wing, 91st Air Refueling Squadron, at MacDill Air Force Base, Fla., flies a training mission over central Florida. The KC-135’s principal mission is air refueling. This asset greatly enhances the U. S. Air Force’s capability to accomplish its mission of Global Engagement. It also provides aerial refueling support to U.S. Navy, U.S. Marine Corps and allied aircraft. Four turbofans, mounted under 35-degree swept wings, power the KC-135 to takeoffs at gross weights up to 322,500 pounds (146,285 kilograms). Nearly all internal fuel can be pumped through the tanker’s flying boom, the KC-135’s primary fuel transfer method. A special shuttlecock-shaped drogue, attached to and trailed behind the flying boom, may be used to refuel aircraft fitted with probes. An operator stationed in the rear of the plane controls the boom.

America’s longest serving tanker aircraft, the KC-135 celebrates its 62nd birthday this year marking a key milestone for an Air Force ‘workhorse’ that has seen action in every conflict since Vietnam and is the reason there’s no place in the world the Air Force can’t reach.

Weighing in at approximately 300,000 pounds each, with a top speed of 600 mph and a range of 5,000 miles, this flying gas station plays a crucial role in making the Air Force’s global presence and rapid global mobility a reality.

A key part of the aircraft’s longevity and success are the experts on the sidelines, the men and women of the Air Force Life Cycle Management Center’s Legacy Tanker Division at Tinker Air Force Base, Okla., working in partnership with professionals from the Air Force Sustainment Center.

“It’s (KC-135) a huge fleet,” said Col. Mark Mocio, chief of the Legacy Tanker Division, which oversees the KC-135. “There’s 396 active tankers at 33 bases around the global operating 24/7. There’s always an aircraft in operation, there’s always maintenance activity going on at any time. Our team is available 24 hours a day, seven days a week to ensure we are able to support current operations.”

Part of supporting the plane includes getting the most out of the mature aircraft and ensuring that it is able to fly well into the future.

“This is a platform that quite frankly wasn’t originally designed to fly for 60 years,” Mocio said. “We’ve had generations of maintainers, operators and operations dating back to Vietnam. We are always looking at the past to see what happened to the aircraft, but we’re also looking at the future to make sure we are taking care of the aircraft because it’s scheduled to fly beyond 2040.”

One of the recent key modifications to the plane includes the installation of Block 45, which according to Keith Lymore, branch chief, KC-135 Program Office, makes the plane more relevant for the future.

Block 45 is an avionics upgrade that drastically improved the KC-135’s situational awareness and navigational abilities by digitizing the cockpit, installing flight director, new autopilot and displays.

Overall Block 45 replaced 63 items that were obsolete or no longer needed.

Not only did the KC-135 Program Office award the Block 45 contract, but the office worked closely with the AFSC as the upgrades were installed fleet-wide.

Other modifications the office is pursuing includes the Real Time Information in the Cockpit program, which according to Maj. Greg Sullivan, deputy branch chief of the KC-135 Program Office, improves battlespace awareness and tactical data links and the ability of the aircraft to operate in both a modern airspace and modern battlespace.

Overall the RTIC will allow the KC-135 to operate closer to the area of battle and provide better support to operators.

Planning ahead for challenges is an area the program office specializes in.

“One of the things we do best is our engineering requirement review planning process,” said Scott Lasiter, KC-135, lead engineer. “That’s a two year process where we identify our challenges and look at solving tomorrow’s problems today. It’s not just putting out fires and repairing what’s broke but repairing what’s going to break tomorrow and projecting that.” 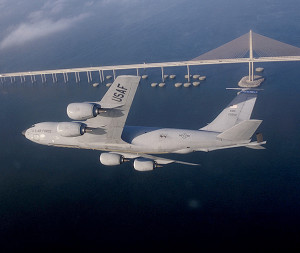 Another crucial part of the program office’s success includes their partnerships with other KC-135 stakeholders.

For instance the office works directly with all the units that fly the plane, getting feedback, monitoring the status of aircraft real-time and constantly looking areas of improvement.

In addition, the office works very closely with experts from the Air Force Sustainment Center’s program Depot Maintenance Line at Tinker. These are the folks that do unique inspections on the aircraft as well as repairing and replacing major structural components that are vital to keeping the plane in the air.

“As the aircraft ages it has become increasingly important for our depot team to work closely with the AFLCMC Legacy Tanker Division to work through all of the issues associated with an older aircraft,” said Mark Estorga, director, KC-135 Tanker Aircraft Maintenance Squadron, with the AFSC. “Although the major structural repairs on these aircraft have increased exponentially the commitment of the System Program Office to provide parts supportability and on-time engineering dispositions has provided our team with the means to make the required repairs and modifications to keep the KC-135 in the air for many years to come.”

Mocio said that his team looks forward to working with stakeholders to support the KC-135 well into the future.

“With the arrival of the KC-46, we are really excited about refreshing our tanker force,” Mocio said. “But I want to make clear that the Legacy Tanker team, the KC-135 team is working to keep our platform as viable as it was on day one and we’ll be carrying the load for as long as the nation needs us. We look forward to getting the new tanker, but we will keep the old one going for as long as we need to.”