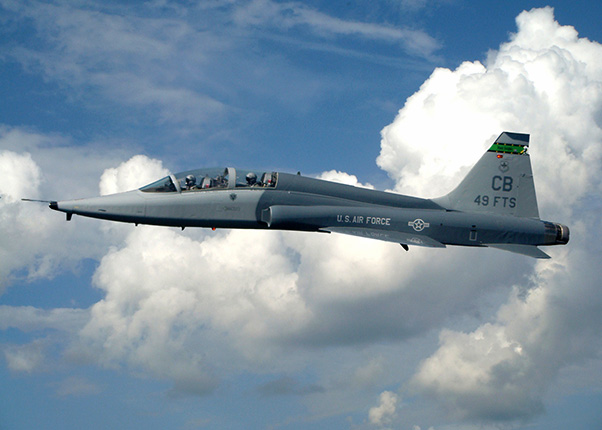 The T-38 Talon is a twin-engine, high-altitude, supersonic jet trainer used in a variety of roles. Air Education and Training Command is the primary user of the T-38C for joint specialized undergraduate pilot training.

The plane went down near the base, north of the city of Columbus. Both pilots were taken to a hospital to be evaluated, although officials couldn’t immediately say Wednesday morning if they had suffered any significant injuries.

A plume of smoke was visible from downtown Columbus.

The Air Force said there were no houses or other structures near the crash site and that the fire was extinguished.

Columbus Air Force Base trains pilots on a variety of aircraft, with more advanced trainees learning on the T-38C. It is used for pilots learning to fly fighter and bomber aircraft.

The Air Force will investigate the causes of the crash, releasing a report later.

Variants of the T-38, a two-seat, twin-engine supersonic training jet, have been used by the U.S. military since 1961. The plane has experienced relatively few major incidents in recent years, according to records maintained by the U.S. Air Force Safety Center. Including today’s crash, there have been only four of what the Air Force classifies as Class A mishaps since 2010. That includes any incident involving death, permanent total disability, destruction of the plane or more than $2 million worth of damage.

The only T-38 fatality during the past decade came in a November 2017 crash near Del Rio, Texas, in which a T-38 based at Laughlin Air Force Base, Texas, went down. Capt. Paul J. Barbour, 32, died.