As the principal investigator for the Extreme Ultraviolet Variability Experiment, or EVE, instrument aboard NASA’s Solar Dynamics Observatory, he’s all too familiar with the ways that exposure to the harsh space environment can lead to a spacecraft instrument’s degradation.

“Since its launch in 2010, EVE’s sensitivity has degraded by about 70 percent at some wavelengths,” Woods said.

When your job is to measure subtle variability in extreme ultraviolet, or EUV, light emitted by the Sun, that amount of degradation, left unchecked, can be a big problem.

But all is not lost: To correct for the effects of degradation, Woods uses calibration sounding rockets. The seventh such rocket will launched from the White Sands Missile Range in White Sands, N.M., at 1 p.m., MDT, June 18. The payload deployed successfully and all 18 channels of the instrument appeared to retrieve quality solar data. The payload was successfully retrieved following parachute landing.

EVE calibration sounding rockets carry a copy of the EVE instrument to approximately 180 miles above Earth, where it measures EUV light from the Sun for about 10 minutes before parachuting back down to Earth for recovery. The measurements, made by the rocket instruments unaffected by degradation, are compared to the those from the degraded satellite EVE instrument, so Woods and his team can correct for any discrepancies. 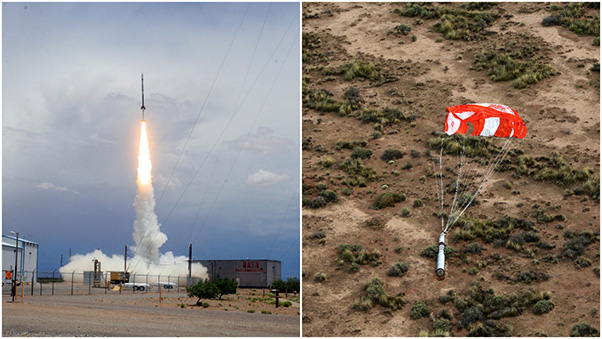 Launch (left) and payload with parachute (right) of the EVE sounding rocket from its flight on June 1, 2016.

“That’s why the sounding rockets are so important – they’re like a second channel, to calibrate the channel that is seeing the Sun all the time.”

The EVE sounding rockets are a critical part of the mission. “Without the calibration, EVE wouldn’t be able to do its job,” Woods continued. “We really wouldn’t know what the brightness of the Sun is, because we wouldn’t know how much the instrument has degraded.”

Thanks to calibration sounding rockets like EVE we can keep our space instruments working at full capacity — and through them, keep our eyes continuously on the skies.