What do you do with airplanes that were built in the early 1960s and are planned to be flying well past their 70th birthday? You give them a structural makeover that will provide the strength and longevity to go the distance.

Designed in the 1950s, the T-38 Talon is a tandem, two-seat aircraft that became the world’s first and most produced supersonic trainer with over 1,100 being built and, thus far, trained an estimated 72,000 pilots from the U.S. Air Force, foreign nations and NASA, that have affectionately nicknamed it “white rocket” due to its thrust-to-weight ratio.

Since entering flying service, each active aircraft has received structural, avionic and propulsion upgrades that have kept them up-to-date and have allowed many airframes to accumulate as many as 20,000 hours of high-G supersonic flight.

With its replacement still to be chosen and the only advanced supersonic trainer available, it has once again become necessary to extend each airframes service life and to that answer is the 575th Aircraft Maintenance Squadron, the only geographically-separated aircraft maintenance, stand-alone squadron within Air Force Materiel Command.

Located at Joint Base San Antonio-Randolph Air Force Base, Texas, the 575th AMXS T-38 Talon depot maintenance team has been providing current upgrade modifications known as Pacer Classic III since 2015 and have to date successfully completed them on 40 aircraft. 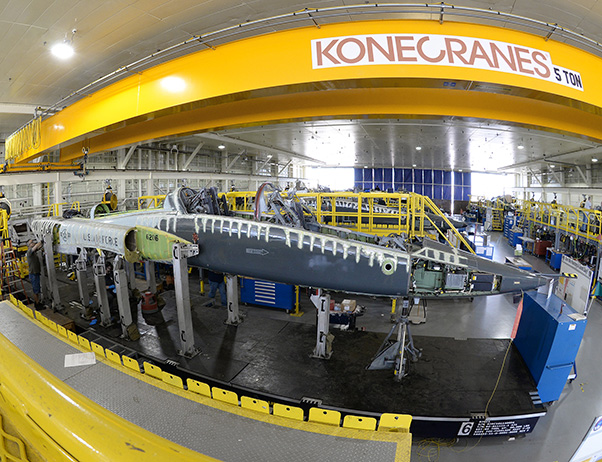 After being lifted into place using the overhead crane, a T-38 Talon fuselage is bolted in-place on a specialized jig April 17, 2018, at Joint Base San Antonio-Randolph, Texas, to ensure that the frame stays in alignment during the Pacer Classic III modification package.

The PCIII modification package is more extensive than any previous T-38 depot overhaul, inspection and repair and are scheduled to take approximately 9,700 hours with a goal of completing each aircraft in 240 days, which is down from 600 days that each of the first two aircraft required for completion.

“We are replacing 185 separate primary structures such as longerons, bulkheads, skins and former assemblies; inspecting and assessing the life of a 155 additional components, and repairing or replacing hundreds of other parts,” said Joe Lopez, 575th AMXS director.

To maximize work efficiency, the 575th has relentlessly sought process improvements and speed through implementation of the Air Force Sustainment Center’s Art of the Possible, or AoP, constraint management methodology. This ensured all operations were completed in a safe and timely manner and allowed the squadron to reach full-rate production of 18 PCIII aircraft per year in fiscal year 2017 while simultaneously closing out four smaller modification programs.

To begin the modifications, each aircraft has paint stripped from designated areas on the fuselage, which gives the aircraft what looks like tiger stripes. After the paint is stripped, the canopies and ejection seats are removed, and the wing and tail assemblies are separated from the fuselage. The wings and more than 600 removed parts are then stored in an 8,500 square foot warehouse that was once the base fitness center. 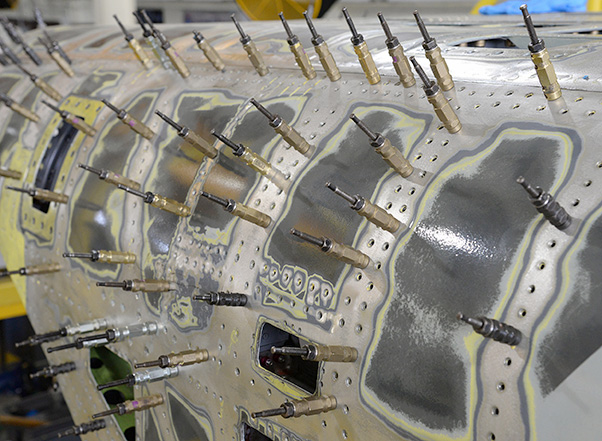 Hundreds of clecos are used to maintain alignment and structural strength after the normal screws have been removed.

Using AoP visual monitoring metrics, the squadron was able to quickly identify a constraint in the accounting and organization of the many removed parts. This was one the largest issues impacting the production machine goal of 240 flow days. Parts that were initially removed from each aircraft were being packed in crates and stored in a manner that made it difficult to track and locate when needed.

With the installation of an advanced ACTIVRAC 16 high-density mobile storage shelving system along with non-movable permanent shelves, crate retrieval that once took multiple man hours to locate and retrieve now only takes one person as little as five minutes.

Today, the squadron is in full-rate PCIII production and is managing the T-38 Talon production schedule in a manner that allows for the completion of an aircraft roughly every 23 days which is putting aircraft back in the hands of the pilots and students that rely on them for maintaining their flying training program.