The demand for space and missile defense capabilities continues to grow in response to the complex array of challenges to our nation from foreign adversaries, said the U.S. Army Space and Missile Command/Army Forces Strategic Command’s senior civilian leader.

James Johnson, USASMDC/ARSTRAT’s deputy to the commander, discussed the increasingly complex threat environment during the AUSA Missile Symposium in Huntsville, Ala., July 10.

“Over the next 10 years we’ll no doubt expand the list of threat systems and capabilities we’ll need to defend against,” he said. “We have to sharpen our technical edge and ensure our lethality overmatch.”

“We must remain bold and innovative, offering solutions to ensure our nation’s forces are prepared to fight across multiple domains,” Johnson said. 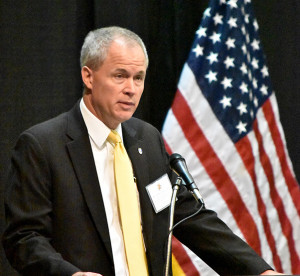 James Johnson, deputy to the commander of the U.S. Army Space and Missile Command/Army Forces Strategic Command, speaks on the growing demand for space and missile defense capabilities at the AUSA Missile Symposium in Huntsville, Ala., July 10, 2018.

As a recognized Army Center for Analysis, SMDC conducts studies to determine how to best meet the Army’s assigned missile defense responsibilities. The command’s analyses support the processes the Army uses to document its missile defense modernization needs, and pursue joint and Army validation of its requirements.

Modernization takes money, Johnson told attendees. “We have seen vast improvement with the fiscal year 2018 budget, with a 100 percent increase for air and missile defense from Fiscal 2017 to fiscal 2018, going from $1.7B to $3.6 billion.”

“That’s a great move toward what we need,” he said. “Sufficient and stable funding to support growth to meet the demand, and a high state of readiness in air and missile defense.”

The United States’ competitors and adversaries will never stop fielding new types of weapons, Johnson said. “Together we are engaged and poised to respond to the needs of today’s forces, to anticipate the future, and to ensure the U.S. Army remains the most dominant land power in the world.”