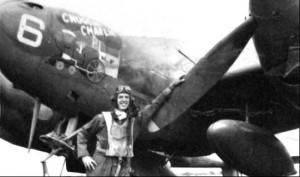 Joe Walker was a P-38 pilot in Italy during World War II.

By Bob Alvis, special to Aerotech News
Many times I wonder what the next installment of High Desert Hanger Stories will be.

After all these years, it amazes me that every time I sit down it doesn’t take long for another aspect of valley aviation history to make its way through my keyboard, to the pages of Aerotech and to you.

A couple of phone calls last weekend with some childhood friends ended with me having a conversation with Jim Walker, one of Joe Walker’s kids. We got on the subject of community service and how the test pilots of that time were very family- and community-oriented.

When the phone call was over, I knew I had my column for this week. It’s a joy to pass this little bit of a Valley icon’s life on to you, with a unique look at the man whose achievements live in the history books and who flew during a very special time in aviation history.

Joe Walker, a decorated World War II P-38 pilot and NASA test pilot, was the man who inspired many a young aviator with his comic book cover and action-hero lifestyle. He was responsible for many aspiring flight test engineers or pilots who went on to study the disciplines of flight, launching journeys in higher education that would benefit all mankind and spur adventurous spirits to challenge the unknown in air and space. 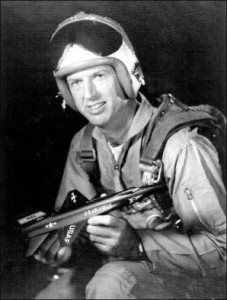 Joe Walker in an official photograph.

But what many folks never realized was Joe’s commitment to the communities he lived in and how far he would go after a day of busting records and risking his life to be just another father and family man, taking part in community activities in order to give his family as normal and full a life as possible.

Joe was a regular attendee at the Methodist church here in Lancaster on West Ave. J and would root his family in the teachings of the ‘Good Book.’ He was involved with many outreach programs that were put forth by that church, which still stands today!

Thinking back, can you imagine how cool it must have been to sit at a Sunday service and realize the guy sitting next to you flew the X-15 and was searching for the same spirituality as you in a Sunday sermon!

Joe was also a member of the Antelope Valley YMCA. Looking at some documents from my time as an Indian Guide at the “Y” along with my dad, I noticed that Joe was Chief of the Longhouse for a period of time and helped with implementing many of the programs that helped Valley youth to be better citizens and team-oriented when it came to group activities. Later, he brought the same message to the Boy Scouts of America here in the Valley when his son Jim joined those activities.

Joe was always in high demand and the community came calling many a time looking for a judge for beauty pageants, chili cook offs, community queens and a whole host of other activities, not to mention a stint with the Antelope Valley Fair’s Rural Olympics! 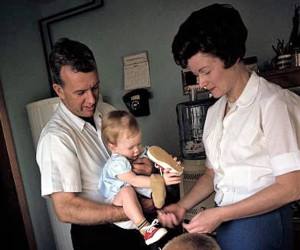 But the one story that is so Joe Walker is the one about the year he coached the Quartz Hill Little League team, the Stars!

Talking with Jim, he told me that everybody who knew his dad knew it was never a half effort with anything he was part of. Joe was not happy with the practice arrangements being afforded him and his team. Looking out the back door of his house here in Lancaster, the wheels started turning and before long, volunteers and family members were hard at work building a full-sized baseball diamond in his back yard! With backstop in place, an irrigation system went in, grass was growing, and Lancaster had its own version of the “Field Of Dreams!” The only problem, it seemed, was that young Jim Walker was the one that inherited the weekly chore of mowing that field. Being that it was on an acre of land, Joe’s love for his team and the game ended up being a certain amount of grief to Jim, as he never had a hankering to be a groundskeeper! 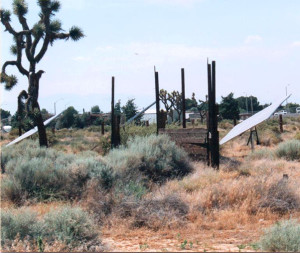 The Joe Walker baseball field as it appears today in Lancaster; only the back stop remains.

Fate would intervene in Jim’s life when his Dad’s fame came to the rescue. During a June 4, 1961, appearance on the television show “This Is your Life,” Joe received as one of his gifts a riding lawn mower! So, like Forrest Gump mowing the endless miles of grass every week, you would see Jim out on the diamond sitting proudly atop his new toy, glad that the days of the push mower were a thing of the past! But like all cool things, even that became a chore and the end of baseball season was always welcomed — until Joe and his kids discovered the field was also a pretty good place to practice football! At least in winter it didn’t require the same love and attention!

Yes, Joe Walker was a pretty cool guy, and the community embraced him and his family. For even with all that ‘test pilot’ swagger, deep down inside he was just the guy we all wanted to call friend. In every picture you see of Joe, his mandatory smile is always present. I guess he just wanted us to all know that, no matter your status or the seriousness of your craft or business, the best trait of your personality to share is your smile.

It must have worked because he sure touched a lot of lives in his short life. I can’t think of one person that ever said an unkind word about him; and if that’s all you take from this life then I think you were one very special person. All of us who were touched by your journey yesterday and today are glad we traveled the Antelope Valley when you called it home.

Joseph Walker lost his life on a mission, when the F-104 Starfighter he was flying chase in was involved in a mid-air collision with the XB-70 Valykrie, on what was called the darkest day in Edwards history. The community and those he worked with felt the loss of a great man and friend. We will never forget his infectious smile and a heart filled with so much positive spirit he freely gave to all that worked with and knew him.