NASA and commercial industry partners Boeing and SpaceX are making significant advances in preparing to launch astronauts from U.S. soil for the first time since the space shuttle’s retirement in 2011. As part of the Commercial Crew Program’s public-private partnership, both companies are fine-tuning their designs, integrating hardware, and testing their crew spacecraft and rockets to prepare for test flights.

Crew, ISS
In March, astronaut Eric Boe visited Space Launch Complex 41 (SLC-41) at Cape Canaveral Air Force Station in Florida. He had the opportunity to see a United Launch Alliance (ULA) Atlas V rocket on the pad and check out the Crew Access Tower. The crew assigned to Boeing’s Starliner spacecraft will launch from SLC-41 atop an Atlas V on their way to the International Space Station.

Also in March, astronauts Bob Behnken, Eric Boe, Doug Hurley and Suni Williams toured SpaceX’s Launch Complex 39A facilities to survey the launch pad and tower modifications. The crew assigned to fly on the company’s Crew Dragon will liftoff aboard a SpaceX Falcon 9 rocket from historic pad 39A.

Later in April, NASA trained Boeing and SpaceX teams to operate the Mine Resistant Ambush Protected armored vehicle designed to help personnel escape the launch pad in the unlikely event of an emergency on launch day. Astronauts and ground crews would have the option to shelter in place in the MRAP, or drive away from the launch pad.

In June, astronauts Ricky Arnold and Drew Feustel installed new cameras on the space station during a spacewalk. These high-definition cameras will provide NASA with an enhanced look of Boeing and SpaceX’s capsules as they approach and dock to the station. 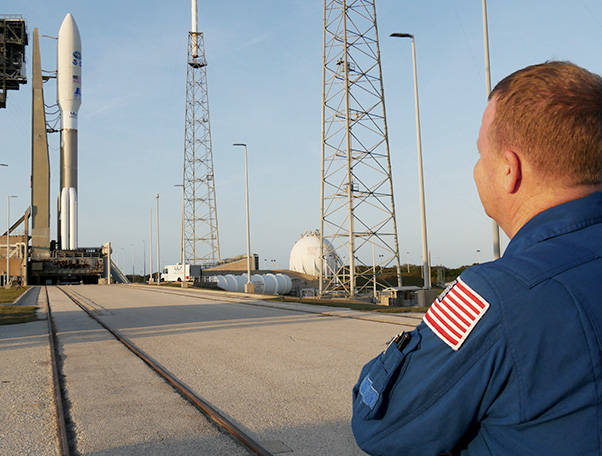 NASA astronaut Eric Boe, one of four astronauts working with the agency’s Commercial Crew Program, had the opportunity to check out the Crew Access Tower at Space Launch Complex 41 (SLC-41) with a United Launch Alliance Atlas V on the pad. Boe, along with launch operations engineers from NASA, Boeing, and ULA, climbed the launch pad tower to evaluate lighting and spotlights after dark. The survey helped ensure crew members will have acceptable visibility as they prepare to launch aboard Boeing’s Starliner spacecraft on the Crew Flight Test to the International Space Station.

In January, astronauts had the opportunity to train using mixed reality—a combination of real world and virtual environment—technology to practice exiting their seats in an uncommon landing situation. The crew were suited up and secured in a mock-up Starliner allowing them to simulate removing their seat harness and opening the hatch of the spacecraft without assistance.

In February, Boeing completed the first in a series of reliability tests of the Starliner flight drogue and main parachute systems in Yuma, Arizona. Data collected from these tests continue to improve accuracy of computer models in predicting parachute performance and verifying reliability.

In May, the White Room, which astronauts will walk through just before boarding Starliner, was installed on SLC-41.

In June, Boeing, NASA and U.S. Army teams rehearsed safely bringing the Starliner spacecraft home to Earth at White Sands Missile Range in New Mexico. When the vehicle prepares for landing, it will deploy a parachute system and touch down in the desert. This exercise tested procedures and communication in place for recovery teams to retrieve the capsule and the crew after landing.

Also in June, Boeing, ULA and NASA simulated an evacuation from SLC-41 to practice escaping from the pad in the unlikely event of an emergency on launch day. Astronauts and ground crews rehearsed zip lining from the launch tower to the ground and driving an MRAP to a triage site for medical attention. Boeing also connected the upper and lower domes of its Crew Flight Test spacecraft and attached its docking system in June.

In July, the dual engine Centaur for the ULA Atlas V rocket that will launch Starliner in the uncrewed Orbital Flight Test was completed. 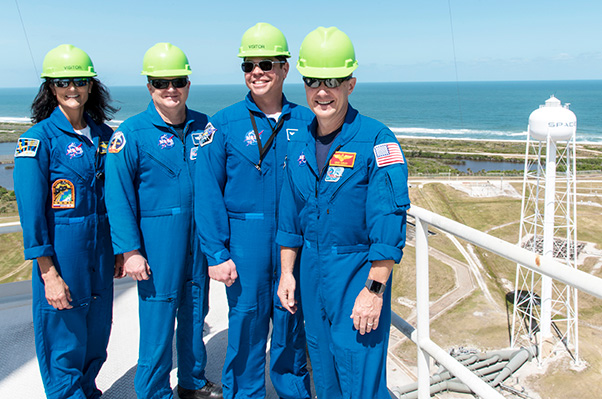 Commercial Crew Program astronauts, from the left, Suni Williams, Eric Boe, Bob Behnken and Doug Hurley take in the view from the top of Launch Complex 39A at NASA’s Kennedy Space Center. The astronauts toured the pad for an up-close look at modifications that are in work for the SpaceX Crew Dragon flight tests. Tower modifications included l removal of the space shuttle era rotating service structure. Future integration of the crew access arm will allow for safe crew entry for launch and exit from the spacecraft in the unlikely event a pad abort is required.

SpaceX
SpaceX continues to test its systems and integrate its launch infrastructure to support the Crew Dragon capsule. The company currently has six Crew Dragon modules in various stages of production and testing.

In March, SpaceX performed two parachute tests, the company’s 14th and 15th overall parachute test supporting Crew Dragon development in the Mojave Desert in Southern California. The latter test demonstrated Crew Dragon’s ability to land safely in an off-nominal situation, deploying only one of the system’s two drogue parachutes and three of the four main parachutes.

In April, astronauts completed a SpaceX spacesuit fit check at the company’s headquarters in Hawthorne, California. These suits will help keep the astronauts safe and comfortable throughout their journey to and from the space station. The company is manufacturing custom suits for each astronaut to ensure a proper fit and comfortable ride on Crew Dragon.

Also in April, SpaceX, NASA and the Department of Defense, conducted joint rescue and recovery exercises in the Atlantic Ocean off of Florida’s eastern coast. In this simulation, DOD pararescue specialists jumped from military aircraft, parachuted to the water, and simulated stabilizing the Crew Dragon capsule and safely removing astronauts from the spacecraft. 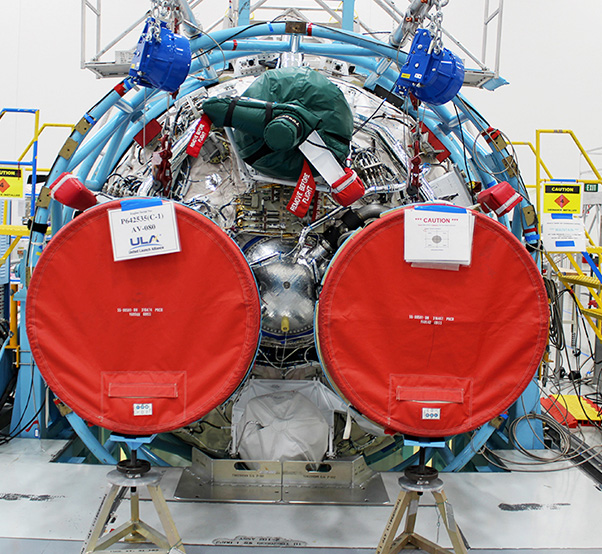 The United Launch Alliance (ULA) Orbital Flight Test dual engine Centaur stage of the Atlas V rocket is in the final stage of production and checkout on May 22, 2018, at ULA’s factory in Decatur, Alabama. Boeing’s CST-100 Starliner will launch on its first uncrewed flight test on the ULA Atlas V rocket.

In May, SpaceX completed its 16th overall parachute system test for Crew Dragon at Naval Air Facility El Centro in Southern California. This test demonstrated the system’s ability to land the spacecraft safely in the unlikely event of a low altitude abort.

In July, SpaceX shipped its Crew Dragon spacecraft to Kennedy Space Center in Florida for processing in preparation for Demo-1, and completed its first high-altitude balloon drop test – and 17th overall parachute system test – in the Mojave Desert from ~50,000 feet.  SpaceX also completed another major round of astronaut and operations team training and simulations in preparation for the Demo-2 mission. Heat shield qualification, as well as a majority of qualification testing for both Crew Dragon and Falcon 9, is now complete. 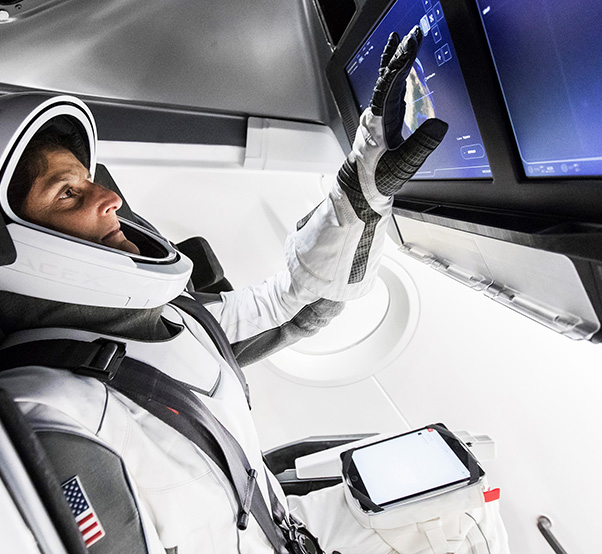 NASA Astronaut Suni Williams, fully suited in SpaceX’s spacesuit, interfaces with the display inside a mock-up of the Crew Dragon spacecraft in Hawthorne, Calif., during a testing exercise on April 3, 2018.