The Advanced Extremely High Frequency Program marked a significant occasion, June 22 when members of the leadership team at the Space and Missile Systems Center [Los Angeles Air Force Base, Calif.] the Aerospace Corporation and Lockheed Martin Space Systems Company all gathered to place their signatures on a thermal space blanket that will travel in space inside the AEHF-4 satellite this coming October.

“We have an opportunity today to bring part of our next space vehicle for the AEHF Program here [for signatures] for some of the folks that have worked on the program for a long time,” said Col. David Ashley, AEHF Program Division Chief. “We were fortunate to have Gen. Thompson, [SMC Commander], to write some messages down on this spacecraft vehicle blanket that’s going to be wrapped around part of our satellite and launched into space.”

Thermal space blankets were also known as emergency blankets when NASA first developed them in 1964. According to NASA.gov, “the blankets are highly reflective insulators that are often included in emergency kits and are also used by long-distance runners after finishing a race to avoid a large swing in body temperature.” During the signing ceremony, all participants had to wear special gloves and use a special marker that was pre-approved for space so as to not contaminate the blanket. 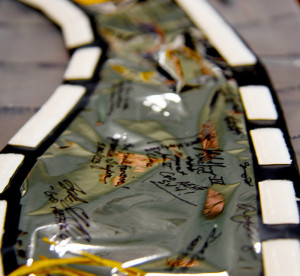 The thermal blanket’s use on the AEHF-4 satellite has the same objective as it does for humans; to help control the temperature variations that can sometimes happen during space travel or to keep the human body temperature stabilized. The thermal space blanket will not only protect AEHF-4’s sensitive components from temperature shifts in space but it will also ensure these parts stay within operational limits despite extreme temperature ranges that can fluctuate anywhere between minus 50 to 100 degrees Celsius.

“Space is a very difficult environment for any kind of electronic or mechanical components to work properly. Engineers use radiators, thermal blankets, and heaters to keep these components at the right temperature,” Col. Ashley said. “This [blanket signing ceremony] represents team-work and the challenges of getting something so technical and complex up in space. The capabilities it provides to our nation and our allies is unrivaled and no other country has this capability for strategic and protected communications.”

The Advanced Extremely High Frequency System is a joint service satellite communications system that will provide survivable, global, secure, protected, and jam-resistant communications for high-priority military ground, sea and air assets. Advanced EHF will allow the National Security Council and Unified Combatant Commanders to control their tactical and strategic forces at all levels of conflict through general nuclear war and supports the attainment of information superiority. The AEHF System is the follow-on to the Milstar system, augmenting and improving on the capabilities of Milstar, and expanding the MILSATCOM architecture.