Hours before the rise of the very star it will study, NASA’s Parker Solar Probe launched from Florida Aug. 12 to begin its journey to the Sun, where it will undertake a landmark mission.

The spacecraft will transmit its first science observations in December, beginning a revolution in our understanding of the star that makes life on Earth possible.

Roughly the size of a small car, the spacecraft lifted off at 3:31 a.m., EDT, on a United Launch Alliance Delta IV Heavy rocket from Space Launch Complex-37 at Cape Canaveral Air Force Station. At 5:33 a.m., the mission operations manager reported that the spacecraft was healthy and operating normally.

The mission’s findings will help researchers improve their forecasts of space weather events, which have the potential to damage satellites and harm astronauts on orbit, disrupt radio communications and, at their most severe, overwhelm power grids.

“This mission truly marks humanity’s first visit to a star that will have implications not just here on Earth, but how we better understand our universe,” said Thomas Zurbuchen, associate administrator of NASA’s Science Mission Directorate. “We’ve accomplished something that decades ago, lived solely in the realm of science fiction.” 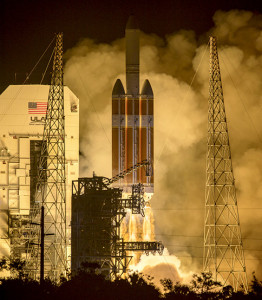 During the first week of its journey, the spacecraft will deploy its high-gain antenna and magnetometer boom. It also will perform the first of a two-part deployment of its electric field antennas. Instrument testing will begin in early September and last approximately four weeks, after which Parker Solar Probe can begin science operations.

“Today’s launch was the culmination of six decades of scientific study and millions of hours of effort,” said project manager Andy Driesman, of the Johns Hopkins University Applied Physics Laboratory (APL) in Laurel, Md. “Now, Parker Solar Probe is operating normally and on its way to begin a seven-year mission of extreme science.”

Over the next two months, Parker Solar Probe will fly towards Venus, performing its first Venus gravity assist in early October – a maneuver a bit like a handbrake turn – that whips the spacecraft around the planet, using Venus’s gravity to trim the spacecraft’s orbit tighter around the Sun. This first flyby will place Parker Solar Probe in position in early November to fly as close as 15 million miles from the Sun – within the blazing solar atmosphere, known as the corona – closer than anything made by humanity has ever gone before.

Throughout its seven-year mission, Parker Solar Probe will make six more Venus flybys and 24 total passes by the Sun, journeying steadily closer to the Sun until it makes its closest approach at 3.8 million miles. At this point, the probe will be moving at roughly 430,000 miles per hour, setting the record for the fastest-moving object made by humanity.

Parker Solar Probe will set its sights on the corona to solve long-standing, foundational mysteries of our Sun. What is the secret of the scorching corona, which is more than 300 times hotter than the Sun’s surface, thousands of miles below? What drives the supersonic solar wind – the constant stream of solar material that blows through the entire solar system? And finally, what accelerates solar energetic particles, which can reach speeds up to more than half the speed of light as they rocket away from the Sun?

Scientists have sought these answers for more than 60 years, but the investigation requires sending a probe right through the unrelenting heat of the corona. Today, this is finally possible with cutting-edge thermal engineering advances that can protect the mission on its daring journey. 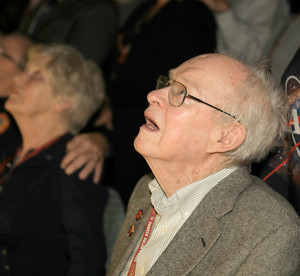 Renowned physicist Eugene Parker watches the launch of the spacecraft that bears his name – NASA’s Parker Solar Probe – early in the morning on Aug. 12, 2018, from Launch Complex 37 at Cape Canaveral Air Force Station in Florida.

“Exploring the Sun’s corona with a spacecraft has been one of the hardest challenges for space exploration,” said Nicola Fox, project scientist at APL. “We’re finally going to be able to answer questions about the corona and solar wind raised by Gene Parker in 1958 – using a spacecraft that bears his name – and I can’t wait to find out what discoveries we make. The science will be remarkable.”

The mission is named for Eugene Parker, the physicist who first theorized the existence of the solar wind in 1958. It’s the first NASA mission to be named for a living researcher.