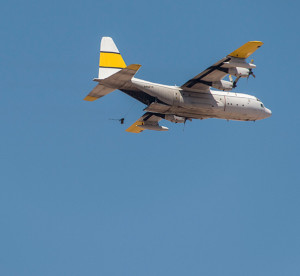 A simulated towed jumper scenario is created during U.S. Army testing with a mannequin that is towed behind an aircraft. The Army is investing in new technology that will help prevent a towed jumper situation from occurring.

Jumping out of a plane may be a routine part of an airborne Soldier’s training, but if the equipment doesn’t function properly, it can be deadly.

“Generally, there are a handful of towed jumpers per year, which can be potentially dangerous situations,” said Samuel Corner, project manager for the U.S. Army Research, Development and Engineering Command Soldier Center Aerial Delivery Directorate.

In March 2017, in an effort to eliminate the possibility of a towed jumper situation, the Aerial Delivery Directorate’s Airdrop Technology team submitted a project proposal to the U.S. Army Foreign Comparative Testing Program, which is embedded in RDECOM’s Global Technology Office, as part of their annual call for proposals. The proposal was selected, enabling the Airdrop Technology Team to purchase ten Hung Up Parachutist Release Assemblies, or HUPRA, from the United Kingdom company, IrvinGQ (formally Airborne Systems Europe) for tests and evaluation.

The HUPRA, which includes an emergency parachute that is released once the Jumpmaster cuts the aircraft anchor line cable, is manufactured by IrvinGQ in the UK. The HUPRA is used by the UK as well as other nations on C-130 and other military aircraft. 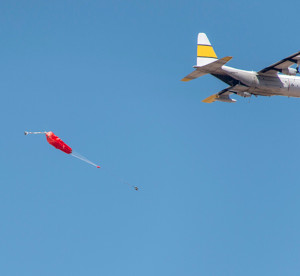 The Towed Jumper Recovery System deploys during U.S. Army testing. The new system includes an emergency parachute that is released once the jumpmaster cuts the aircraft anchor line cable.

By purchasing the system from the UK, the Army saved approximately $500,000 in non-recurring engineering costs and additional costs to develop, integrate and validate a new recovery system.

“Testing, which includes aircraft time and manpower to design validation tests, is very expensive,” Corner said. “We built on efforts of the UK by using their lessons learned to accelerate our process and decrease our costs.”

The tests, which were conducted at Yuma Proving Ground, Ariz., used mannequins that “jumped” out from the aircraft’s side doors and ramp. The testing was conducted on C-130 aircraft and divided into seven phases; minor changes were made to the system after the first phase was completed.

Before a Soldier jumps out of an aircraft, a Jumpmaster conducts a personnel inspection of the Soldier’s attaching, jumping and releasing equipment. Jumpmasters must complete a rigorous training program before they manage airborne jump operations. 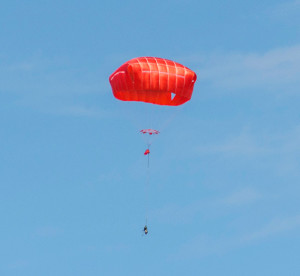 A fully deployed Hung Jumper Release System safely carries a test mannequin to the ground during U.S. Army testing on a new system to help prevent issues with towed jumps.

One of the goals of the tests was to ensure the system recovered with an All Up Weight maximum of 400 pounds, slightly above the UK’s fielded version of the HUPRA systems capabilities. AUW includes the weight of the Soldier, the weight of the parachute system, which is approximately 40 pounds, and the weight of the equipment that Soldier needs for a mission — rucks, guns, ammunition, food and water.

While Standard Operating Procedures were developed based on the C-130 aircraft that was used during testing, another set of SOPs will be developed for C-17 aircraft, which is a much larger aircraft that the Army uses.

“The TJRS program has been positively briefed to the Army Airborne Board,” Corner said. “The next step is to work with the board and TRADOC to develop a formal requirement for a jumper recovery system. After that, the project will transition to PM Soldier Clothing and Individual Equipment, under PEO Soldier.”