China is not an enemy, but it is certainly an adversary of the United States, and the Defense Department’s 2018 report to Congress examines the trends in Chinese military developments.

China’s economic development is fueling extraordinary changes in relationships it maintains around the world, according to the report. On the face of it, China’s “One Belt, One Road” initiative sounds benign – it looks to build infrastructure for developing countries and Chinese neighbors.

Chinese leaders have funded serious projects as far away as Africa under the initiative. They have built roads in Pakistan and made major inroads in Malaysia. China has a major stake in Sri Lanka. Kazakhstan, Mongolia, Laos and Djibouti also are involved.

The Chinese government seeks to overturn the established international order that has kept the peace in the region since World War II and allowed Asian countries to develop.

But “One Belt, One Road” money and projects come with strings. The “one road” leads to China, and nations are susceptible to Chinese influence on many levels – political, military, and especially, economic. 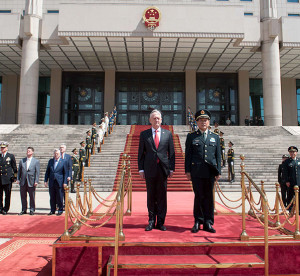 Economic clout
In 2017, China used its economic clout in South Korea as a bludgeon to get Seoul to not allow the United States to deploy the Terminal High-Altitude Area Defense system in the country as a counterweight to North Korea’s nuclear missile program. The Chinese government informally lowered the boom on South Korea economically to influence the THAAD decision.

South Korean cars and other exports were embargoed. About a quarter of all goods South Korea exports goes to China, so this had an immediate effect on the economy. In addition, tourism suffered, as nearly half of all entries to South Korea are from China, and South Korean retail stores in China were crippled.

The South Korean government decided to allow the THAAD to deploy, but China’s economic muscle movement had to be noted in other global capitals.

South China Sea
“In its regional territorial and maritime disputes, China continued construction of outposts in the Spratly Islands, but also continued outreach to South China Sea claimants to further its goal of effectively controlling disputed areas,” the DOD reports says in its executive summary. In other words, China is using military power and diplomatic efforts in tandem to claim the South China Sea.

The People’s Liberation Army has come a long way from the human-wave attacks of the Korean War, and Chinese leaders want to build a military worthy of a global power. “Chinese military strategy documents highlight the requirement for a People’s Liberation Army able to secure Chinese national interests overseas, including a growing emphasis on the importance of the maritime and information domains, offensive air operations, long-distance mobility operations, and space and cyber operations,” the report says.

Chinese military planners looked at what the United States accomplished in Operation Desert Shield/Desert Storm in 1990 and 1991 and charted their way forward. The PLA is fundamentally restructuring to challenge and beat any military in the world.

The PLA – still the largest force in the world – actually cut people to streamline command and control and modernize forces. The Chinese seek to win at all levels of conflict, from regional conflicts to wars with peer competitors. “Reforms seek to streamline command and control structures and improve jointness at all levels,” the report said. The PLA is using realistic training scenarios and exercising troops and equipment regularly.

Marine Corps Gen. Joe Dunford, chairman of the Joint Chiefs of Staff, meets with Chinese President Xi Jinping in the Great Hall of the People in Beijing, Aug. 17, 2017.

New capabilities
China is investing billions in new capabilities including artificial intelligence, hypersonic technology, offensive cyber capabilities and more. China also has launched an aircraft carrier and added many new ships to the PLA Navy. The Chinese Navy is more active and making more port calls than in years past. Further, the PLA Marine Corps is expanding from 10,000 personnel to 30,000.

The PLA Air Force has been reassigned a nuclear mission, giving China a nuclear triad — along with missile and subs — for the first time.
Cyber operations play a significant role in the Chinese military. The PLA has a large corps of trained and ready personnel. Cyber espionage is common, and there are those who believe China was able to get plans of the F-35 Thunderbolt II joint strike fighter, which they incorporated into its J-20 stealth fighter.

The U.S. National Security Strategy and National Defense Strategy recognize that China and Russia are strategic competitors of the United States. Still, the United States must engage with China, and maintenance of cordial military-to-military relations is in both nations’ best interests.

“While the Department of Defense engages substantively with the People’s Liberation Army, DOD will also continue to monitor and adapt to China’s evolving military strategy, doctrine and force development, and encourage China to be more transparent about its military modernization,” the report says.

The United States military will adapt to counter and get ahead of moves by any competitor, DOD officials said.