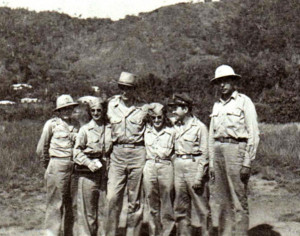 John Wayne, along with fellow USO entertainers in Australia. “Like my friend Gary Cooper,” Wayne said, “I’m here to entertain the troops. I have no special act, but hope to get by on appearances.”

This Veterans Day, I was thinking of all those who never served, but embodied that same wartime spirit of the American fighting man.

I don’t think anybody would doubt that John Wayne was an advocate for the military in this country, but a few kind of took exception to The Duke’s non-military service in World War II. I would like to say a few things to help give context to the role Wayne played during World War II.

Marion Morrison was born in Iowa on May 29, 1907. The family came to southern California soon after and, due to his dad’s health conditions, they moved up here to the Antelope Valley. They farmed a small ranch near the present day UPS facility on Avenue L and Sierra Highway. Young Marion attended Lancaster Elementary School on Cedar Street, riding an old horse back and forth to classes on dirt trails south of Lancaster. The family was only here for a short while, as the farming did not take hold, and they soon found themselves living in Glendale. Eventually Marion learned the trade of acting and transformed into the mighty Duke — the John Wayne of movie fame.

Having established himself as an actor and a fan favorite, he was in high demand. When Dec. 7, 1941 came around, that demand went even higher.

It is said that wars are not just won by bombs and bullets, but by hearts. With brave service members risking their lives in battle, it’s the job of those on the home front to provide endless encouragement to their protectors overseas. Americans have always honored and encouraged their troops and World War II was no different.

President Franklin Roosevelt was determined military service members would be honored for their sacrifices by a strong support system, both at home and on the front lines. From that desire, Roosevelt requested a morale boosting service be created to provide recreational activities and entertainment for the tenacious American Soldiers.

Mary Ingraham, then president of the YWCA, became the head person that would bring many service groups together to form the United Service Organization — “USO”. That organization was tasked to provide recreation, but they also wanted to be a reflection of America. From that desire, the famous Camp Shows became the hallmark of the USO. For the entirety of the war, they would present more than 400,000 shows at bases and on ships all over the world. Mary was faced with creating an Army of her own that would be the face of America. She was given permission to draft entertainers who would bring a bit of home to the soldiers in the field. Her first class of inductees included Bob Hope, Fred Astaire, Rita Hayworth, Frank Sinatra and John Wayne. The tour performers made it their mission to alleviate all kinds of suffering, but none more than homesickness.

Nobody better represented American values, culture and the comforting feeling of home then John Wayne. The actor was determined to do his part and provide his support for the brave men overseas in any way he could. During his first overseas USO tour in 1943, Duke performed twice a day for three months straight, visiting south west Pacific bases and front lines across Australia, New Britain and New Guinea. John Wayne did what he did best, even in a world away from home. He represented the heart of America by showing an unwavering appreciation to those sacrificing their lives. Moved by the troops’ dedication, Duke tried to match their endurance. Not only did he perform twice a day, but he also visited hospitals, sat with injured troops and swapped stories deep onto the night.

Upon returning home, John Wayne reflected during a press conference on what he tried to provide to the soldiers during his travels. “They’re where 130 degrees is a cool day; where they constantly scrape flies off; where matches melt in their pockets and daisy cutter bombs take legs off at the hip. They will build stages out of old crates then sit in the mud and rain for three hours just to hear somebody say “Hello, Joe.”

John Wayne formed deep bonds with service members on tour and even after returning to Hollywood he continued to be their link to America by writing letters to them. The Camp Shows evolved into a welcome, sentimental reminder of American life for the troops. If those familiar to them — friends, family and loved ones — were unable to visit the war zones, figures like John Wayne were the next best thing to evoke warm memories and comforting feelings of home. John Wayne never put on the uniform of this country except for a movie role, but The Duke did serve in a capacity that was just as important to every service man that stood a post or faced a battle: he gave them a bit of home and a reason to press on.

On this Veterans Day, we salute and remember our veterans. We must also be thankful for those who served in a different manner by taking on the role of a mother or father, sister or brother, taking the minds of those far from home off the horrors of war and giving them hope.
Until next time, Bob out ….