Flames in luminary bags flickered during the night of Dec. 15 above gravesites across Lancaster Cemetery in honor of veterans buried there, men and women devoted to protecting America.

Dave Owens, chairman of the Board of Trustees for the Antelope Valley Cemetery District greeted the crowd of people attending the event, mainly families that had a loved one buried there. He explained that the luminary ceremony started nine years ago in conjunction with the annual Wreaths Across America memorial which took place earlier that day.

“This is our twist on Wreaths Across America. We wanted to put our spin on it,” Owens said. “It’s become a holiday tradition. We’re so grateful for the community support. We’ve been doing (it) nine years, a luminary in front of every single wreath. We truly appreciate all the people who helped make them.”

“Ken has been sponsoring it every year,” Owens said, introducing Lancaster City Councilman Ken Mann, whose late father Clifford Mann was a World War II staff sergeant in the Army Air Corps and served as a ball turret gunner in battle.

Mann said he sponsors the luminary ceremony in honor of his father, who left historical records of the war.

“He had lots of pictures of bombing raids, notes of how many planes were in the mission,” Mann said.

His father joined the military in early 1944 and flew a potentially deadly mission on the B-17, known as “the Flying Fortress.” 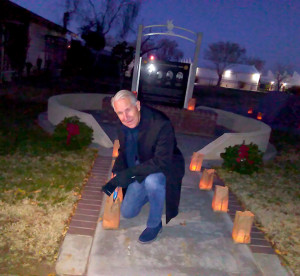 “Prior to 1944, you had to complete 25 missions to be released from the military service before you could go home,” Mann said. “Prior to 1944, the chance of making it to 12 missions was one in four. If you were a ball gunner, the chances were even less. You had a three- to four-month potential life span.”

“That was the cost of doing business if you were going to get the upper hand (against) Germany,” Mann said.

A tail gunner had a life expectancy of four missions. That’s two weeks, Mann said. If the planes engines were hit, that could knock out the turret’s electrical or hydraulic systems. “That meant the ball turret gunner was stuck until they got back. If the damage affected the landing gear, it meant the that the full weight of the plane came down on the gunner.”

Mann said once he understood how hazardous those missions were, he realized that if his father had not survived, the family lineage would have ended at that point.

Because of the extreme danger, the people who flew those missions recited the following prayer before they headed toward their destination.

“Lord, guard and guide the men who fly, through the great spaces of the sky. Be with them as they take to air, in the morning light and sunshine fair.”

“Eternal father, strong to save, give them courage, make them brave. Protect them wheresoever they go, from shell and flak and fire and foe.”

The prayer goes on to ask that the crew be sheltered from harm, kept together and returned safely home.

As participants went off to light the luminaries, Owens took note of yellow bags marked with a gold star. They represented mothers who lost a child in combat.

“We thought they were very deserving of a wreath and luminary,” Owens said. 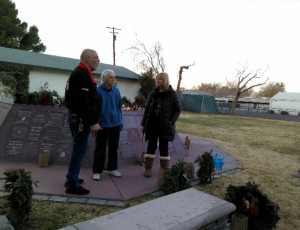 Dayle Debry, cemetery manager, along with Ida and Phillip Ketchum, prepare to place luminaries at the Lancaster Cemetery Dec. 15. Ida, along with her son Phillip, take part in the ceremony in honor of her husband, retired Air Force Tech. Sgt. Richard Ketchum who died Nov. 30, 2016.

Lancaster resident Ida Ketchum and her family were out at the gravesite of her husband, Richard Ketchum, a retired Air Force technical sergeant, who died Nov. 30, 2016.

“I placed the first wreath that year because he had done it for years,” she said.

Ida Ketchum, an Ohio native, born and raised on a Midwest farm, said she met her husband in 1958 and they wed in 1960. Their meeting was happenstance, what some might call serendipity.

“He was a jet engine mechanic when I met him.” Ketchum said he was in a hospital at the time.

“I went with my friend whose boyfriend was in the hospital. They were going to introduce me to a second lieutenant. But he was discharged from the hospital that day. Richard was in the same organization, so he was asked to keep me company.” They took their wedding vows a year and a half later and were married more than 56 years at the time of his death.

Eventually he went from being a jet engine mechanic to working in heavy ground radar, she said, and his years in the military took them to many locations, including Boron, where they family settled for a while. Their oldest son, Phillip, followed his father’s military career and is now retired from the Air Force. Their younger son, Brian, born at Edwards Air Force Base, chose a different career path.

Ketchum, who worked at NASA for 34 years, said when her husband retired from the Air Force in 1975, he was a technical sergeant.