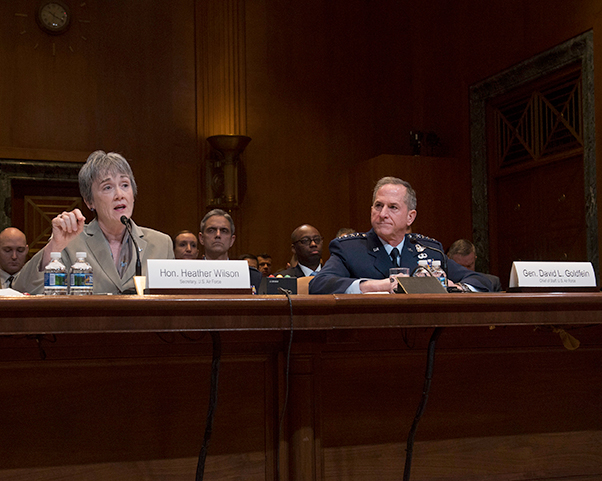 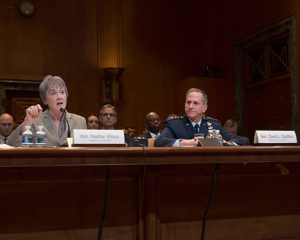 Secretary of the Air Force Heather Wilson and Air Force Chief of Staff Gen. David L. Goldfein testify during a Senate Appropriations Committee hearing on the fiscal year 2020 funding request and budget justification for the Department of the Air Force in Washington, D.C., March 13, 2019.

Air Force Secretary Heather Wilson told senators March 13 that the service’s $165 billion budget for fiscal year 2020 is designed to make the force larger, more ready and modern while also positioning it to better confront changing threats in space and globally.

In the first public remarks since announcing her resignation, Wilson told the Senate Appropriations Subcommittee on Defense that the Air Force has improved readiness by 15 percent over the last two years; it has erased a shortage of maintainers that numbered 4,000 when her tenure as secretary began in 2017. Pilot retention has improved and in the coming year, 1,480 new pilots are to be trained compared to 1,211 in 2018.

Even so, Wilson conceded that, given the threats of the world today, “the Air Force we need is larger than the Air Force we have.” The budget proposal unveiled March 12 is a blueprint for addressing those needs and priorities.

Joined by Air Force Chief of Staff Gen. David L. Goldfein, Wilson outlined the spending plan’s priorities for the near term while also setting the stage for advancement and improvement over a longer period. Foremost among the longer-term goals is increasing the number of operational squadrons to 386 from the 312 currently available.

Though readiness can be defined and measured in myriad ways, Wilson told senators during the cordial, two-hour session that, “It’s about the readiness of our squadrons to fly and fight that matters to us.”

While most of the hearing focused on broad issues, Wilson and Goldfein were asked by senators to address more specific issues ranging from the status for upgrades and maintenance at Malmstrom Air Force Base in Montana to questions about the number of KC-46 Pegasus tankers to be delivered in the coming year. Others asked about Air Force activities in the Arctic and whether a proposal by President Trump to redirect funds already approved for military construction for a wall along the Southwest border would affect the Air Force.

Wilson said the Air Force has not identified projects that would be affected.

There also was a question about an Air Force program to develop and purchase light attack aircraft.

With the changes, the light attack program will be expanded over the next three fiscal years, beginning in 2020, to include manned and unmanned aircraft, rotary wing, turbojet and turboprop platforms. The Air Force will invite industry, allies and partners, and the U.S. Marine Corps to participate.

Goldfein told Sen. Jerry Moran, R-Kansas, in response to a question that two planes are impressive but there remain questions that the broader effort will answer.

As written, the proposed budget for 2020 attaches numbers to larger strategic goals that include the need to meet challenges posed by China and Russia, provide a safe, secure, and effective nuclear deterrent while continuing to disrupt violent extremists in a cost-effective manner.

It also provides funding to maintain the United States’ dominance in space while also solidifying — and expanding — changes in the way the Air Force buys products to make it faster, more nimble and entrepreneurial.

In direct testimony or in response to questions, Wilson or Goldfein noted that the budget calls for purchasing an additional 48 F-35A and eight upgraded F-15EX fighters. It provides funding for 12 KC-46A tankers.

Wilson and Goldfein touched on all of those topics during two-hour hearing that marks the opening moment in a usually arduous and months-long process in which Congress will finalize and approve the Air Force budget.

Asked about a proposal to create a Space Force as a separate command within the Air Force, Wilson said, “The United States is the best in the world in space and our adversaries know it.”

A Space Force, she said, will “elevate and enhance the influence of space leaders in the Pentagon for the long haul.”

Wilson also emphasized the need for a budget that is both large enough to meet the needs and is predictable. Asked to assess the effect if the government returned to the practice of “budget sequestration” when automatic spending cuts were imposed across all federal agencies, Wilson said the result would be “devastating.”

“Our adversaries around the world have not done as much to damage the United States Air Force as sequester did,” Wilson told senators, adding that it grounded “about a third of the Air Force” and created a maintenance backlog of more than 1 million hours.

“If we did it again, the cuts would be deeper, and the impact would be more lasting,” she said.