For a long time we searched for what would seem to us the one right way to express the honor and reverence we owe to our former fellow workers who have gone forth from these factories to a war from which they will not return. I hope we have found the way they themselves would prefer, and if it is not too much to hope, a way which may bring some comfort to you.

A “Lightning” P-38 fighter plane, dedicated to Joseph McDaniel Fluty and bearing his name, has just been delivered to the Air Force which will fight it in the same cause for which he gave his life. It bears an emblem – a star of gold, with wings – and across it runs the Latin world “Resurgam” – “I shall rise again”.

His name upon this emblem means to us that this ship, which is the bravest and best we know how to build, will be fought against the enemy by the strength of two men – a fighting pilot, and a valiant fighting spirit. Its Gold Star emblem was fastened to it at the very beginning of our manufacturing operation. All down the assembly line and through its final test, this Fighting Memorial plane received special and respectful attention from every man and woman who touched it.

So I am sure that it is a better airplane even than most of our airplanes, and that it will be flown more truly and surely in battle. I hope you will feel that by this memorial, the spirit of Joseph McDaniel Fluty is implemented and will fight on to final victory and freedom in our good cause.

Will you please, in token of our respect and obligation to him and to you, accept these photographs in remembrance? 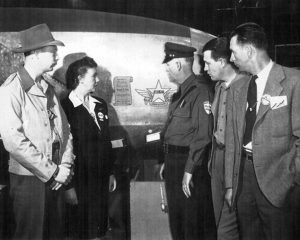 In the last installment of High Desert Hangar Stories, we learned of a young aviation warrior’s youth and the journey of his family during the turbulent times of World War II, as he and his family traveled from Visalia to Lockheed Burbank to do their part for the war effort.

Young Mack Fluty had fulfilled his desire to join the ranks of American fighter pilots and was destined to fly combat in the Lockheed P-38 Lightning, which he and his family had helped produce in Burbank in the early years of the war.

Mack had two families at this time: the ones that carried his blood lines, and the coworkers he and his family had worked beside at Lockheed. Both families celebrated the victories of war together, but also mourned the losses as one. On March 8, 1944 in battle-torn Europe, two families — one of blood, the other of sweat — suffered a loss when young 1st Lt. Fluty was lost while flying a combat mission. The first lieutenant, who was previously decorated for bravery in combat, had flown his last mission in this life. As the two families mourned the loss of a beloved son and worker, the Lockheed family put forth the effort that would ensure that Fluty’s spirit would take to the skies again, along with the thanks of every person on the assembly line that helped produce the aircraft he was flying in combat.

The letter quoted at the beginning of this story was the one that was sent to the Fluty family after Mack’s death.

It started a chain of events that would end with a very special presentation on the production line to Mr. and Mrs. Fluty, broadcast live throughout the Burbank plant. A very special P-38 began its long journey from the production lines to combat in the skies, with another American pilot flying the legacy of Lieutenant Fluty back into the skies — the all-American Boy and Patriot who had given his life in defense of freedom for not only we the citizens of America, but of the world. 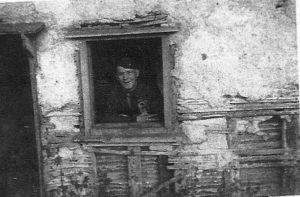 One of the last photos of 1st. Lt. Joseph M. Fluty in Europe during World War II.

As I was writing this issue’s entry for High Desert Hanger Stories, I realized that I could not do this story justice in just two installments. There is much more to this story to wrap it up in a proper fashion, so I will be adding a “Part Three,” to bring it to a close.

Stories like this, when I sit alone at my desk late into the night, gain a special spirit that many times pulls at my heart and leaves me in a state of despair — but at the same time, drives me to do the best I can to present and share stories of past generation’s sacrifices, so that future generations will not take our freedoms for granted. It’s important to remember the price that was paid by American families, who lost loved ones in such a noble cause as defending the ideals of America.

Next Issue: the final installment of “Lockheed Remembers One of Its Own” — and seeing as we’ll be approaching Easter at that time, I think it’s a very fitting time to remember sacrifice on behalf of others and a testimony to the human spirit.