The end of the story, the final resting place of 1st Lt. Joseph Fluty in the Visalia District Cemetery.

Lockheed remembers one of its own: Mac comes home

When researching history, it’s often hard to not become emotionally involved when that history deals with the passing of a soldier. The life that is cut short is also a tale of family and friends, and how they came to cope with such a tragic loss in a world at war. The telegram from the war department to Lieutenant Fluty’s parents was one of many that were finding the mailboxes of American families every day during the years of World War II.When the dreaded Western Union man showed up on the doorstep of 607 North Sycamore Street in Burbank, the door opened to the unspeakable pain that would now be received in the message that a beloved son, brother or uncle was never coming home. As we saw in the second installment of this story, the Lockheed family was also feeling that loss.As the wheels were turning in the upper ranks of management to honor one of their own, the employees also felt it was their duty to come up with a gesture to show the family their understanding of the loss.What sparked my interest in this story was a chance article I saw in a Lockheed Star publication from World War II, that told of Lockheed employees pulling together to plant a tree in the honor of Lieutenant Fluty in the yard of the family home in Burbank. A simple gesture that those involved hoped would ease the pain, as a living tribute in their yard that would grow tall and strong every day and remind the family of the love of many for a fallen son and brother. 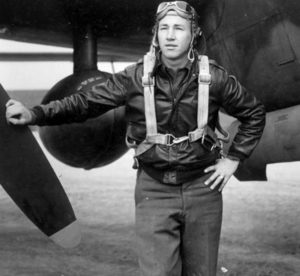 When the war came to an end, many families were left to find their way back from the communities and industries that had sprung up around the war production world. With their service to the war effort on the home front ended, they felt the need to try and recapture the lifestyle they’d had before Uncle Sam came calling for so many. The Fluty family was no different, and a less hectic life in Visalia in the San Joaquin Valley pulled at their hearts. Before long they had a new address, living in a little two story house that was built in 1915 on a shady street in a Visalia residential neighborhood.Mom and Dad had returned to the community that was the keeper of so many cherished memories of raising a family before the war years. But something was still missing as they settled into their new life, trying to connect to the past. An important piece of their former life was in a grave in an English cemetery, as far as one can get from rural Visalia. Then came the day when a Western Union Telegram showed up at their front door, much like the one a few years prior. It simply stated that, if desired, the remains of 1st Lt. Joseph Fluty could be returned to American soil, or left overseas in an American Veterans cemetery.In the Times Delta newspaper dated July 1, 1948, it was reported that the remains of four Tulare County Airmen who had died in the European Theater during World War II were being returned aboard the U.S. Army Transport Lawrence Victory. One of those Airmen was the son of Mr. and Mrs. John Fluty.  I’m sure the celebration of life was a community affair with many folk attending who had contact with our young aviator over his life. And I’m sure it brought peace of mind to the family that their beloved “Mac” was now back home and his final resting place could be visited when the urge came to connect with the soul of a beloved son. But this story still has a lot of holes to be filled like: what ever happened to the P-38 specially constructed by Lockheed in Burbank that was flown into combat in Lieutenant Fluty’s honor? What ever happened to the P-38 that Mac was flying on the day he was lost? 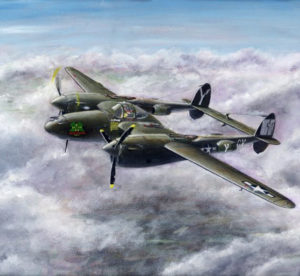 A painting of 1st lt. Joseph Fluty on his last mission returning to England before tragedy struck.

One thing I did discover was that the tree that was planted at the Fluty family home in Burbank survived for many years, with families who lived there afterwards never knowing that the shade in their front yard was courtesy of Lockheed employees, in honor of a fallen hero. Feeling the desire to walk this history, I found myself one day on North Sycamore Street, going for a walk in search of a particular tree. I was disappointed when the street number revealed a million-dollar apartment complex covering the addresses of those small homes that, during the war years, were home to the lifeblood of American industry — the everyday workers of the defense contractors.It made me sad to think when the day came, that some construction worker had bulldozed a tree without knowing its history — the story of Mac’s tree and how, for a period of time, it shaded the Fluty family from the heartache of war and the loss of a son. It was just reduced to scraps to be hauled away to a landfill.This ends my three-part story of one family’s loss and the loss of a valued member of the Lockheed Family in Burbank during World War II. So many sad aspects to this story, but remember, this was just one family during a time when many more families were suffering in similar ways. My story here is just a reminder that we must keep that “tree of knowledge” growing, so future generations will understand just what an incredible generation it was that saved the world for all of us to enjoy. We do not grieve that these soldiers died, but rather we must celebrate that men like Lieutenant Fluty lived. I’m sure the Fluty family, like so many others, would appreciate us remembering the price they paid for our freedoms. Blue Skies, Mac, may you rest in peace. Until next time, Bob Out …