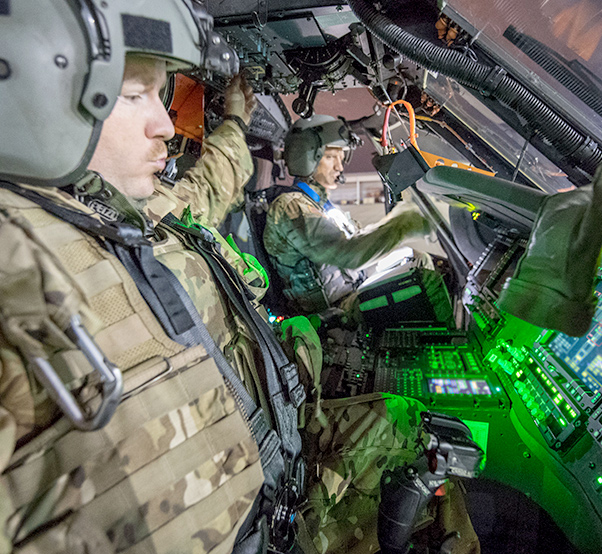 With nearly 10 percent of aviators now leaving the Army, many of them for commercial airline jobs, the general in charge of the aviation branch said adjustments are needed to reduce the historic attrition rate.

“We have a commercial airline industry that needs pilots,” said Maj. Gen. William Gayler, commander of the Army Aviation Center of Excellence. “All of our [military] services have seen aircrew members migrate out to the commercial world.”

“That’s alarming,” Gayler said Monday during a conference hosted by the Army Aviation Association of America, or Quad A.

Incentive pay boost
One way to keep pilots in the Army has been bonuses, but Gayler argues that is only a short-term fix.

Instead, the aviation branch has proposed to boost aviation career incentive pay, or flight pay, which can retain more qualified aviators, he said.

“We probably need to look at it and adjust it a little bit if we’re having to throw bonus money to keep people,” he said.

While the figures have yet to be determined, today’s aviators can earn up to $840 per month for active flight pay — a rate that has not changed in more than a decade.

“It’s time for an adjustment again,” the general said.

For aviators who achieve a significant milestone, such as becoming a pilot in command, instructor pilot, or test pilot, for example, they could also receive additional incentive money, called pro-pay, short for professional pay.

“We need to look at paying folks for what their skills require,” he said.

In another effort to keep more aviators, the branch has recommended to increase its active-duty service obligation for new aviators from six to eight years, similar to what other services do, he said.

It also dropped the active federal service maximum to eight years for enlisted Soldiers, an important step since about 75 percent of warrant officers were once enlisted. Before, an enlisted Soldier could convert to warrant having already served up to 12 years, shortening their aviation service if retiring at 20 years.

“All of these are just levers to try to retain people,” he said. “The single most important will probably be to pay them for what their skills require. That’s a tough thing to do right now when money is a challenge and we have to prioritize for other things, but we’ve got to find ways to keep them.”

The general also mentioned a budding Captain Intermission Program, which handpicks newly promoted captains in the aviation branch to stay at Fort Rucker, Alabama, as an instructor pilot, pushing their year group two years so they’ll remain competitive for future commands and promotion.

“This young group of officers want to be experts in their branch,” he said. 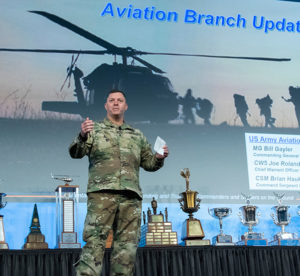 Maj. Gen. William Gayler, commander of the Army Aviation Center of Excellence, provides an update on the aviation branch during a conference hosted by the Army Aviation Association of America, or Quad A, in Nashville, Tenn., April 15, 2019. A boost to aviation career incentive pay, or flight pay, and other measures, he said, have been proposed to retain more qualified aviators in the Army.

The program even frees up some warrant officer talent to fill holes in the field as the selected captains stay behind to train future aviators.

“We have to start thinking differently about how we manage talent and how we increase expertise and capability back in the formations,” Gayler said.

Fort Rucker will receive 30 VR simulators based on the UH-72 Lakota, a light utility helicopter currently used as a trainer in flight school. The trainers also include artificial intelligence and cognitive assessment tools.

The goal, Gayler said, is to produce better aviators while also progressing them through flight school faster based on individual proficiency.

“If you can train tasks with more frequency and repetition, the learning process improves quicker,” he said, adding about 1,300 aviator students cycle through Fort Rucker each year.

At a time of shortages in the career field, positive leadership is another way to retain more experienced Soldiers.

When the general speaks to graduates of leadership courses at Rucker, he often makes it a point to tell them to smile more.

Smiling is not a sign of weakness, he said, adding it’s important to have fun and be approachable.

“Make a Soldier look at you and say, ‘I want to be that person,'” he said. “Because if you’re not demonstrating positive leadership, I guarantee you they don’t want to replace you.”