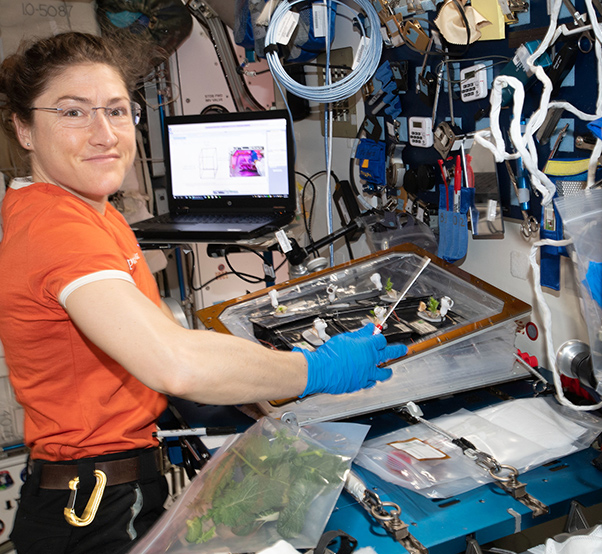 Koch, who arrived at the space station March 14, and now is scheduled to remain in orbit until February 2020, will set a record for the longest single spaceflight by a woman, eclipsing the record of 288 days set by former NASA astronaut Peggy Whitson in 2016-17. She will be part of three expeditions – 59, 60 and 61 – during her current first spaceflight. Her mission is planned to be just shy of the longest single spaceflight by a NASA astronaut – 340 days, set by former NASA astronaut Scott Kelly during his one-year mission in 2015-16.

The mission schedule currently is as follows: 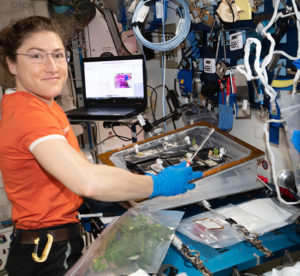 NASA astronaut Christina Koch conducts botany research aboard the International Space Station, where she’s been living and working since March 14, 2019. Her mission has been extended, and she will remain at the station until February 2020.

Sept. 25: NASA astronaut Jessica Meir is scheduled to launch to the station with Roscosmos cosmonaut Oleg Skripochka and United Arab Emirates’ Hazzaa Ali Almansoori, a Roscosmos spaceflight participant who will return with Hague and Ovchinin Oct. 3. Meir and Skripochka will return in spring 2020 with Morgan.

The extended missions of Koch and Morgan will help scientists gather additional data about the effects of long-duration human spaceflight beyond those of the normal six-month station expedition. Such research is essential to support future deep space exploration missions to the Moon and Mars.

NASA has gathered vast amounts of data on astronaut health and performance over the past 50 years and has focused recently on extended durations up to one year with the dedicated mission of Scott Kelly and extended mission of Peggy Whitson. These opportunities also have demonstrated that there is a significant degree of variability in human response to spaceflight and it’s important to determine the acceptable degree of change for both men and women. 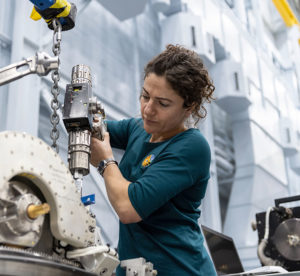 NASA astronaut Jessica Meir trains inside the Space Vehicle Mockup Facility at NASA’s Johnson Space Center. She has been assigned to her first spaceflight, and will launch to the International Space Station in September 2019.

“Astronauts demonstrate amazing resilience and adaptability in response to long duration spaceflight exposure,” said Jennifer Fogarty, chief scientist of the Human Research Program at NASA’s Johnson Space Center in Houston. “This will enable successful exploration missions with healthy, performance-ready astronauts. NASA is looking to build on what we have learned with additional astronauts in space for more than 250 days. Christina’s extended mission will provide additional data for NASA’s Human Research Program and continue to support future missions to the Moon and Mars.”

This schedule also allows NASA to get the most time dedicated to other research aboard the station, as U.S. commercial crew launch providers prepare for operations to and from U.S. soil and the space station.

Meir’s September launch to the station will mark her first spaceflight. The Caribou, Maine, native was selected as an astronaut in 2013, while serving as an assistant professor at Harvard Medical School/Massachusetts General Hospital. She holds a bachelor’s in biology from Brown University, a master’s in space studies from International Space University, and a doctorate in marine biology from Scripps Institution of Oceanography.

Prior to her selection to the astronaut corps, Meir’s career focused on the physiology of animals in extreme environments, studying emperor penguins in the Antarctic, elephant seals in California, and bar-headed geese in studies at the University of British Columbia and in Mongolia. Meir also previously worked for Lockheed Martin’s Human Research Facility, participated in reduced gravity research flights, took part in diving expeditions to the Antarctic and Belize, and served as a spaceflight analog crewmember for a NASA Extreme Environment Mission Operations underwater mission and an ESA caving mission (ESA CAVES). 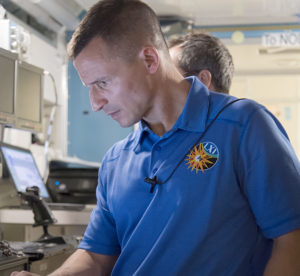 NASA astronaut Drew Morgan trains inside a mockup of the International Space Station at NASA’s Johnson Space Center. His mission, which will launch in July 2019, has been extended through March 2020.

Morgan will make his first flight into space this summer. Morgan, who calls New Castle, Penn., home, was selected to be an astronaut in 2013, when he was serving as an emergency physician in the U.S. Army with sub-specialty certification in primary care sports medicine. He is a graduate of the U.S. Military Academy at West Point and the Uniformed Services University of the Health Sciences in Bethesda, Md.

Keep up with the International Space Station, and its research and crew, at https://www.nasa.gov/station.