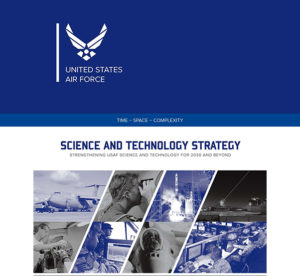 The 32-page report is a blueprint for the next decade and beyond. The strategy includes an array of changes allowing the Air Force to maximize – and expand – its technological advantage in the new era of peer-to-peer threats.

“This strategy isn’t just a list of technologies. Our approach will be to predict where adversaries cannot easily go and make sure the Air Force gets there first,” Wilson said.

The plan for executing this strategy is divided into three objectives to make the vision a reality:

“The Air Force will prioritize five strategic capabilities while maintaining the ability to dominate time, space, and complexity across all operating domains,” she said.

While the strategy will spur innovation and efficiencies across a broad range of programs, Wilson said the document places a special emphasis on hard-to-crack efforts related to multi-domain warfare.

While the strategy features a collection of new policies, tools and practices, it also calls for a modified “return to our roots” by focusing 20 percent of Air Force science and technology (a subset of research, development, test & evaluation) funds on path breaking “Vanguard” projects.

This effort will advance emerging weapon systems and warfighting concepts through prototyping and experimentation. The concept is drawn from past successes such as the “Century Series aircraft.” These aircraft ranging from the F-100 to F-106 were developed in the 1950s and 1960s broke new ground, marking the first supersonic and double supersonic fighters and the first tactical aircraft designed to carry nuclear weapons.

“Transforming the force will require a change in mindset requiring everyone involved to stretch their thinking from what is possible to what is conceivable,” said Dr. Richard Joseph, the chief scientist of the Air Force. “Most of all, it requires that the S&T and operational elements of the Air Force work together to confound the strategies of our adversaries.”

Through sustained commitment to implementing the goals of this strategy, the Air Force will position itself to deliver disruptive innovations to the joint war fighter.