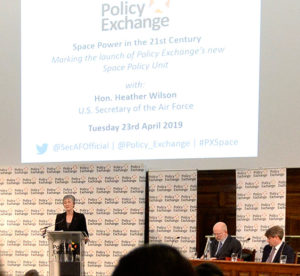 Secretary of the Air Force Heather Wilson spoke at the Policy Exchange, a U.K.-based think tank that launched their Space Policy Unit in London, April 23.

Speaking to an audience of more than 200 leaders from government, business, academic, defense and financial communities, Wilson highlighted the U.S. Air Force space strategy and the importance of partnering with allies.

“We all prefer that space remains peaceful, because if war extends into space everyone loses,” said Wilson. “We are developing the capabilities to deter and, if necessary, to fight and win, in the space domain … so that our adversaries choose wisely to deal with our diplomats and not with our warfighters.”

The Air Force is focused on further advancing space—on taking tried and proven methods of joint war-fighting, and applying them to the space domain.

“We have been exercising our ability to conduct war-fighting operations in a contested space domain,” Wilson said. “Every new scenario sharpens our skills and knowledge about our satellites and how to protect them.”

“Satellites were designed when space was a benign environment,” Wilson said. “The Air Force will now have to rethink how we protect what we have and design new satellites to defend themselves.

If a conflict extends into space, our satellites must be able to take a punch and fight back,” she said.

Wilson added, we are stronger together, and she stressed the Air Force will continue to collaborate with U.S. government, allied and commercial partners to leverage the unique strengths each brings to deter and dissuade a conflict extending to space.

This requires a multi-dimensional strategy that includes a web of capabilities to dominate in space.

“Our people make all of this happen,” Wilson said. “From introductory space courses through joint and allied training, to real-world coalition deployments, our people are developing experience together.”

They are developing hands-on knowledge on how to integrate space, cyber, air, sea and land components faster and to greater effect.”

Seventy years ago this month, 12 nations signed the North Atlantic Treaty Organization and it has helped keep the peace in Europe ever since. To protect the space domain Wilson added, the U.S. must foster healthy alliances, because the world relies on it for essential services.

“With our joint services and allied partners, we are developing a global network of war-fighting capabilities and expertise,” Wilson said. “We want any adversary to pause and to wonder how we might respond to a provocation in space.”