On May 1, 1959, the Beltsville Space Center in Greenbelt, Md., was renamed NASA’s Goddard Space Flight Center in honor of Robert H. Goddard, widely considered the father of modern rocketry. Thus began a 60-year boom in science and technological innovation.

The center has led or contributed to many of the agency’s accomplishments, ranging from missions to the Moon to detecting the first light in the universe and arriving at an asteroid in space to collect a sample. Goddard now boasts the largest concentration of scientists and engineers dedicated to the study of Earth and space and has successfully sent more than 300 satellites into orbit, secured more than 800 patents, produced more than 50,000 science and technical publications, and contributed to several significant awards, including the Nobel Prize in physics.

Many of its innovations have resulted in commercial applications, such as spacecraft sensors and control centers being re-purposed for traffic management and methods for grinding large observatory mirrors being used to improve machines for Lasik surgery. Thanks to its past successes, Goddard is poised to contribute to NASA’s future goals, including sending a crewed spaceflight to land on the Moon by 2024 and eventually to Mars.

Over six decades, Goddard expanded from 1,200 acres in Greenbelt to include five additional sites in New York; White Sands, N.M.; Wallops Island, Va.; Palestine, Texas; and Fairmont, W. Va. Goddard stimulates and strengthens economic activity from local to national scales, investing in technology, manufacturing, and contracting. Goddard’s partnerships and technology transfer spur innovation and business growth. Its workforce has grown from 650 employees in 1959 to approximately 13,000 in 2019. Consisting mostly of scientists and engineers, its workforce also comprises a large cadre of professionals in such fields as procurement, outreach and finance – all of whom contribute to the center’s success. It boasts a diverse workforce as a key element in problem-solving and innovation.  In 2018, NASA ranked first among the 17 large agencies and Goddard ranked second among NASA centers, in the best places to work in the federal government, according to the Partnership for Public Service – a nonprofit, nonpartisan organization working to make government more effective. 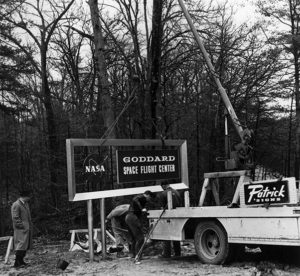 Computer engineer Harvey Walden has worked at Goddard for 56 years and has seen advancements unimaginable 60 years ago. “I’ve witnessed many changes at Goddard over the last 56 years of Goddard’s 60-year history,” he said. “Nothing describes them better than Dr. Robert H. Goddard’s own oft-quoted maxim: ‘It is difficult to say what is impossible, for the dream of yesterday is the hope of today and the reality of tomorrow.’ NASA’s Goddard Space Flight Center proves the truth of that statement better than almost any place on Earth.”

Goddard’s work in studying the Sun, Earth, solar system and far reaches of the cosmos – as well as in developing such technologies as space communications and robotics – while maintaining a vibrant workforce makes its anniversary tag line  “Bringing the Universe Into View” a reality.