by Adrienne King, Aerotech News
To mark the 20th anniversary of the Sept. 11, 2001, terrorist attacks, a multi-agency ceremony was held at the Antelope Valley Mall on Sept. 11, 2021.

In addition to the many first responders, members of the community and civic leaders gathered near the Fallen Heroes Memorial.

During the ceremony Capt. Eric Broneer of the Antelope Valley CHP read the 17 names of local fallen heroes engraved on the pillars at the Fallen Heroes Memorial.

The newest name added to the memorial pillars was that of CHP Officer Andy Ornelas, a four-year CHP veteran, who passed away in December after a collision on his motorcycle.

LA County Sheriff Captain Ronald Shaffer recognized the families of Sgt. Steve Owen, Andy Ornelas and Detective Mitch Speed. Fire Chief Robert Garcia, spoke on the feeling of pride and patriotism and neighbors helping neighbors. Garcia also urged everyone to take a moment to stop at the Fallen Heroes Memorial to view the names honored on the memorial.

The ceremony concluded with a multi-agency flyover. 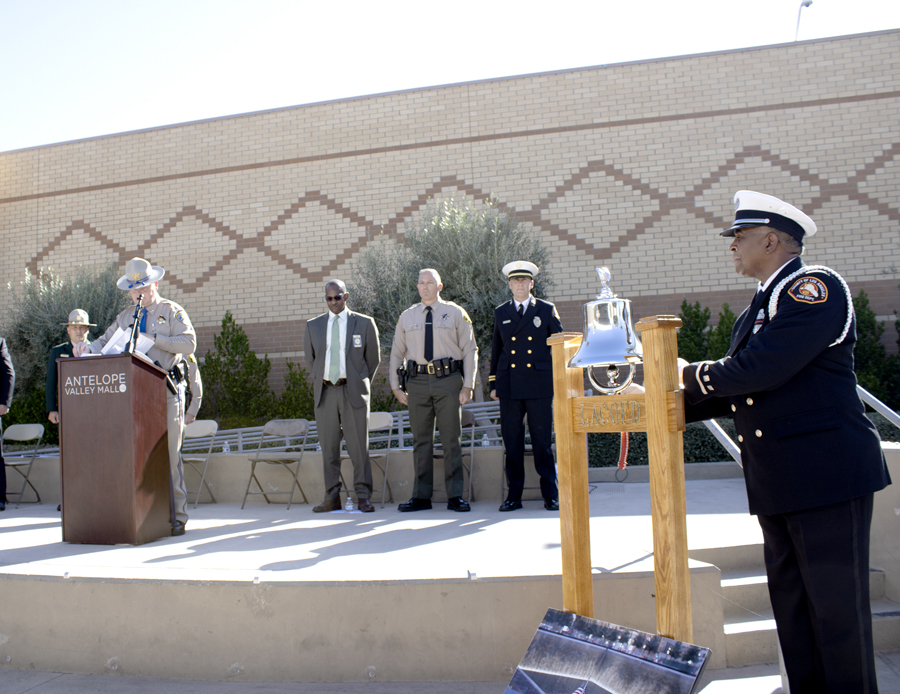 As California Highway Patrol Captain Eric Broneer marks the moments of the attacks, a member of the County of Los Angeles Fire Department rings a bell four times during the 20th Anniversary Remembrance ceremony of the 9/11 terrorist attacks at the Antelope Valley Mall. The bell is rung four times to coincide with the times that the planes crashed into and the subsequent collapse of the World Trade Center on Sept. 11, 2001. Photograph by Adrienne King)