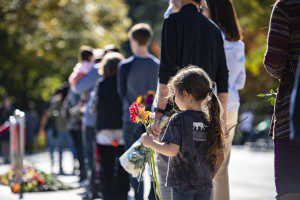 For the first time in nearly 100 years, members of the public walked on the Tomb of the Unknown Soldier Plaza and laid flowers to personally honor the unknowns.

The event is one of many at Arlington National Cemetery marking the centennial of the tomb, the grave of three Unknown Soldiers, and a symbolic tribute to the memory of all U.S. service members through history.

Families with small children and other civilians, veterans and service members all stood in line for the opportunity to approach the sacred space, many offering prayers or salutes in addition to flowers.

The two-day ceremony opened Nov. 9 with remarks, performances and offerings from representatives of the Crow Nation, an echo of 100 years earlier, when Crow Chief Plenty Coups participated in the Nov. 11, 1921, interment service for the first Unknown Soldier.

The flower ceremony was to end with the same benediction given by the first Army chief of chaplains in 1921.

Volunteers provided flowers to people who did not bring their own. Cemetery officials said the flowers would be disposed of in an environmentally friendly way, with some being saved for historical purposes.

Walking next to the tomb is a privilege otherwise given only to the sentinels of the 3rd U.S. Infantry Regiment, known as “The Old Guard,” who have maintained an around-the-clock vigil at the site for decades. The Tomb Guards themselves traditionally lay flowers at the tomb as an offering of respect when they perform their last walk.

The sentinels continued their vigil during the flower ceremony, though they changed their traditional position, walking on the east side of the tomb to allow the public access.