Cardenas was born in Merida, Yucatan, Mexico, March 10, 1922. Moving to San Diego at age 5, he attended schools in San Diego, and graduated from the University of New Mexico at Albuquerque in 1955 with a Bachelor of Science degree in mechanical engineering.

His military career began in 1939 when he became a member of the California National Guard. He entered aviation cadet training in September 1940 and received his pilot wings and commission as second lieutenant in July 1941.

From June 1947 to July 1949, Cardenas was an experimental test pilot at†Edwards Air Force Base, Calif., and Wright-Patterson AFB, Ohio, and was awarded the Air Medal with two oak leaf clusters for experimental flight tests at Edwards AFB.

As a test pilot, he is well known for piloting the B-29 launch aircraft that released the X-1 experimental rocket plane — in which then — Capt. Charles “Chuck” Yeager became the first human to fly faster than the speed of sound in 1947.

Cardenas was also the principal test pilot for the Northrop YB-49 Flying Wing, making his first flight in the aircraft in December 1947.

He was also the operations officer for testing of the YB-49 flying wing. Cardenas was also the investigating officer after the YB-49 crashed killing Capt. Glenn Edwards and Maj. Daniel Forbes on June 5, 1948.

Cardenas flew the evaluation tests that would inform the Air Force’s decision on whether to buy the Flying Wing.

By May of 1948, the phase II tests were almost complete when Cardenas had the opportunity to finish his engineering degree at the University of Southern California. Maj. Gen. Al Boyd chose Capt. Glen Edwards to replace Cardenas as the project pilot.

Cardenas checked out Edwards in the YB-49 on May 20 and 21, 1948, and afterwards drove to Dayton, Ohio, to pick up his fiancé, Gladys, and getting married. On June 5, as Cardenas was taking his new bride to meet his parents, he heard on the radio that the YB-49 had crashed killing Capt. Glen Edwards, Maj. Danny Forbes, 1st Lt. Ed Swindell and civilians C. Lesser and C. H. LaFountain. Cardenas school orders had been cancelled by Boyd, and he was ordered to finish the testing and find out what had caused the crash of theYB-49.

On Feb. 9, 1949, Cardenas flew the YB-49 non-stop from Muroc to Andrews Air Force Base, Md., in 4 hours 5 minutes setting a new transcontinental record.

President Truman was at Andrews AFB that day and said to the chief of the Air Force (about the YB-49), “General, it looks pretty good to me. I think I’m going to buy some of these.”

However, Cardenas had already written a report, which said that the airplane was not suitable as an operational bomber.
Truman then said, “Let’s have this whippersnapper fly this thing down Pennsylvania Avenue.” 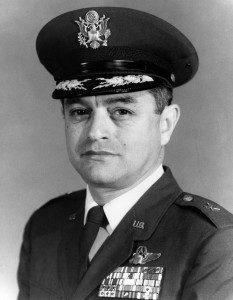 But before becoming a test pilot, he was a B-24 Liberator pilot in Europe during World War II. Serving with the 506th Bombardment Squadron based at RAF Shipdham in England, he flew his first B-24 mission over Europe in 1944.

On his 18th mission, then-Captain Cardenas’ plane was shot down over Germany when its right wing was severely damaged by a shell and both engines caught on fire. He landed on the German side of Lake Constance, and walked along the north side of the river at night to evade the Nazis.

“I went down, and the Germans never got me,” he said. “I walked along the river at night and started swimming across, which is when I made a fatal mental mistake.”

“I think I had a near-death experience,” he said. “First it was panic, then resignation, then a kind of calmness. Then, a Swiss man in his rowboat tapped me on the head.”

Rescued and taken to Switzerland, Cardenas was eventually flown back to the United States to recover from a head injury.

“As an only child, my mother was very protective and scared I might hurt myself,” Cardenas said. “My parents were floored when I went down, and [they] assumed I was KIA, or Killed in Action.”

After recovering from his injury, for which he was awarded the Purple Heart, Cardenas attended instructor school for the B-24 bomber and became a test pilot. In 1945, he began piloting experimental aircraft.

After returning to the United States, Cardenas was assigned to Wright Field, Ohio, as a test pilot where he attended Experimental Flight Test School.

Cardenas’ last Air Force assignment was as chief, National Strategic Target List Division, Joint Strategic Target Planning Staff, at Offutt AFB, Neb. His mission was to develop and compile a listing of targets that must be struck in a general nuclear war by U.S. retaliatory forces and develop estimates of enemy defenses and offensive capabilities.

On April 15, 1993, the University of New Mexico, College of Engineering, honored him for his Outstanding Professional Contributions and Leadership.

The USAF Test Pilot School at Edwards AFB honored the general on Dec. 10, 1994, as a “Distinguished Alumnus” and in September 1995, he was inducted into the “Aerospace Walk of Honor” at Lancaster, California.

Cardenas was one of five test pilots honored on the Walk of Honor in 1995, along with Capt. Glen W. Edwards; Fred W. Haise; William C. Park and Brig. Gen. Guy M. Townsend.

The Walk of Honor website at https://www.lancastermoah.org/walk-of-honor lists a veritable “who’s who” of aerospace history.

“My husband Al and I had the honor of meeting him in 2005, at the Aerospace Walk of Honor in Lancaster,” she said. “We displayed our UH-1H helicopter during the event and also attended the black-tie banquet held that evening. We had the feeling of an instant bond with the general. That often happens to me in when meeting folks from the aviation community.

“We were just visiting with a group of people and we struck up a conversation with this really neat guy that we had not met before,” she continued. “It was General Cardenas.

“Immediately we found ourselves reminiscing about mutual friends from Edwards AFB, and historic aircraft and became lost in time. His wife tapped him on his shoulder and reminded us that it was time to sit down for dinner. I think we could have talked right through dinner and not even missed eating that night!

“Brig. Gen. Robert and Mrs. Cardenas were delightful and he is a giant aviation legend who flew at Muroc and Edwards AFB. He is one of a handful of living icon test pilots that we have the distinct pleasure of knowing,” Hansen said.

Brig. Gen. Robert “Bob” Cardenas was an aerospace legend and will be missed.