This historic launch, the first ever on British soil and the first commercial launch from Western Europe, will feature a shared mission between the United Kingdom’s Ministry of Defense and the United States’ National Reconnaissance Office. The launch is scheduled to take place later in the year out of Newquay Airport in Cornwall, in southwestern Britain. ‘Cosmic Girl’ will fly from Mojave Air and Space Port to Cornwall. 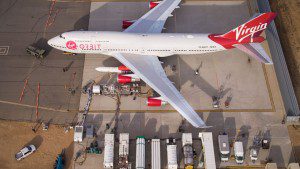 The mission is expected to pave the way for a more collaborative and connected space communication system between the United States and its allies. The two Prometheus 2 CubeSats Virgin Orbit will deploy will provide a test platform for monitoring radio signals, including GPS and sophisticated imaging.

The Prometheus satellites cost less than $100,000 each, are expected to have a service life of three to five years and are demonstrating the capability to transfer audio, video, and data files from man-portable, low-profile, remotely located field units to deployable ground stations terminals using over-the-horizon satellite communications. Each satellite features four deployable solar arrays and a deployable helix antenna. The second generation Block 2 satellites feature several improvements. The solar arrays have been enlarged and the attitude control system has been improved. A star field sensor and a GPS receiver were added. Also they provide the opportunity for hosted payloads, as a 1.5U payload module can be added to each satellite.

Cosmic Girl will fly hundreds of miles before releasing a rocket directly above the equator (known as a global sweet spot) or at other optimal locations identified for each individual mission.

In addition to bringing this important new capability to the country and economic value to the region, the locale is geographically one of the most advantageous places in the world four the LauncherOne system to launch satellites into orbit.

Virgin Orbit believes this is another step towards opening space for good, for everyone, from everywhere.

L3Harris Technologies is an American technology company with a global reach as a defense contractor, and information technology services provider that produces C6ISR systems and products, wireless equipment, tactical radios, avionics and electronic systems, night vision equipment, and both terrestrial and space-borne antennas.

One aircraft will be modified to carry LauncherOne for satellite launches and the other 747 will not only be modified as a launch aircraft, but will also be designed with the capability of a cargo ship to carry and deliver rockets and ground support equipment to foreign space centers.

L3Harris and Virgin Orbit have worked together before to produce Virgin Orbit’s flagship aircraft Cosmic Girl, which was previously a passenger plane flown by Virgin Atlantic.

“Virgin Orbit is at an exciting juncture in our growth as a company,” said CEO Dan Hart. “As we expand our fleet to serve customers worldwide, we’re enthusiastic to once again partner with L3Harris.”