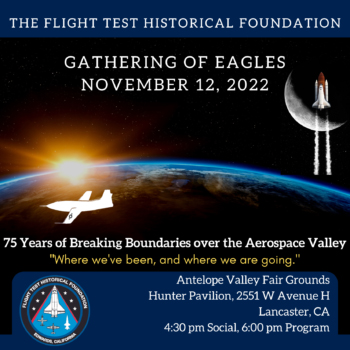 In a dual tribute to “where we have been and where we are going,” the Flight Test Historical Foundation’s Nov. 12 Gathering of Eagles will bring together those who’ve been breaking barriers for 75 years, with those poised on the conquest of space.

Foundation representative Lisa Brown said, “We are honored to have Mr. Roddenberry as our chair for the event. Since Star Trek has been breaking barriers and inspiring generations for decades, we thought it fitting to have him at our 75th Anniversary of Breaking Barriers.”

She added, “He will discuss barriers the show has broken and where the show is boldly going in the future.”

In its traditional format, the Gathering of Eagles will again host a panel discussion of experts, this year featuring key figures from SpaceX, Blue Origin, Virgin Orbit, and NASA. They are expected to talk about the science of the aerospace and flight test that brought the aerospace world to where it is today, and what the future holds for human space exploration.

The Flight Test Historical Foundation has been honoring luminaries in the aerospace world at events and award dinners for many years. In 1997, the FTHF awarded the first Eagle Awards to Chuck Yeager, Bob Hoover, Bob Cardenas, De Beeler, and crew chief Jack Russell on the 50th Anniversary of the Bell X-1 breaking the sound barrier.

Every year thereafter, the foundation awarded members of teams engaged in significant milestones in flight test and aerospace advancement conducted in the Aerospace Valley.